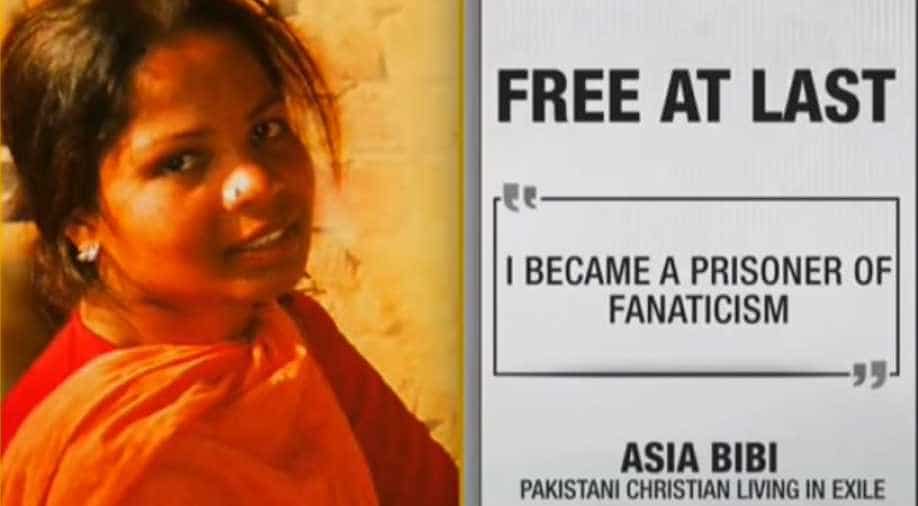 Soon after being freed, Bibi flew to Canada where she was reunited with her family. They are all believed to be living at a secret location.

Asia Bibi, the Christian woman who spent eight gruelling years in a Pakistan jail for blasphemy has released the latest pictures of her life living in exile in Canada.

Her biography, titled 'Enfin libre! (Finally Free)' has been co-written in French by journalist Anne-Isabelle Tollet who was a leading campaigner for Bibi's freedom and the only journalist to have met her after being her acquittal.

Bibi gives the first personal account of her arrest, the conditions of the prison and everything that followed.

"I became a prisoner of fanaticism," Bibi says adding that tears were her only companions.

Describing the horrible conditions of the jails in Pakistan where she was kept chained, Bibi says, "My wrists are burning me, it is hard to breathe. My neck... is encased in an iron collar that the guard can tighten with a huge nut".

Also read: Asia Bibi, Jagjit Kaur's names echo at UNHRC chamber as India hits out at Pakistan in its right of reply

"Deep within me, a dull fear takes me towards the depths of darkness. A lacerating fear that will never leave me," her account reads.

Blasphemy is a highly inflammatory issue in Pakistan where even unproven accusation of insulting Islam can spark violence.

Bibi was sentenced to death on blasphemy charges by a Pakistani court in 2010 but was acquited in the year 2018. She had vehemently denied all charges against her. In her biography, she argues that the Christian minority in Muslim=-majority Pakistan continues to face persecution.

"Even with my freedom, the climate (for Christians) does not seem to have changed and Christians can expect all kinds of reprisals. They live with this sword of Damocles over their head," an excerpt from Bibi's biography reads.

Soon after being freed, Bibi flew to Canada where she was reunited with her family. They are all believed to be living at a secret location.

"In this unknown country, I am ready for a new departure, perhaps for a new life. But at what price? My heart broke when I had to leave without saying goodbye to my father or other members of the family. Pakistan is my country. I love my country but I am in exile forever," she says in her book.