EVM can be tampered within 90 seconds: Kejriwal's challenge to Election Commission 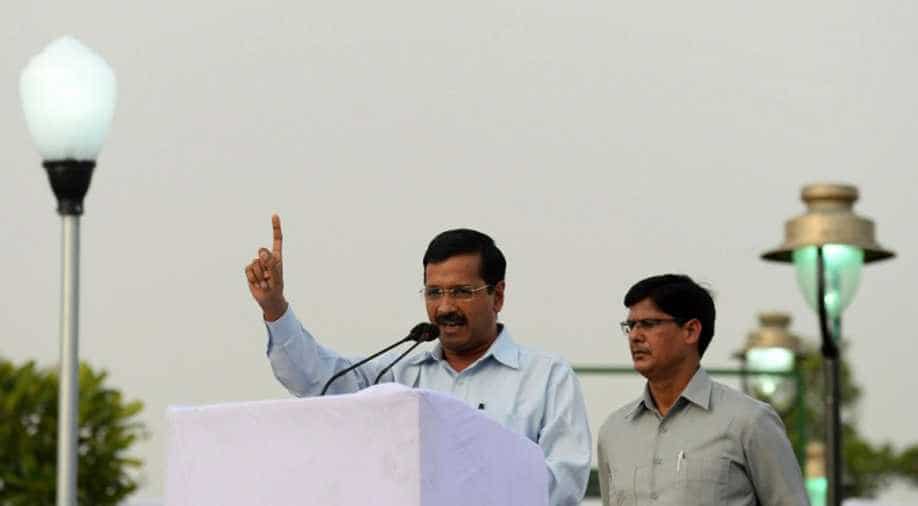 At a session in the Delhi Assembly, the AAP demonstrated how EVMs can be manipulated ||The Election Commission dismissed the AAP's claims about the rigging of EVMs ||AAP leader Saurabh Bhardwaj gave a live demo of how parties use a secret code to sway votes

Even as India's Election Commission Tuesday dismissed the claims made by the Aam Aadmi Party (AAP) about the rigging of Electronic Voting Machines in elections, Delhi chief minister Arvind Kejriwal dared the poll body to provide EVM machines to the AAP.

The AAP chief claimed an EVM could be "tampered with" in "90 seconds".

"The ECI can give us its machines, we will show how to hack it in 90 seconds by merely changing its motherboard," Kejriwal told reporters outside the Assembly.

Deputy Chief Minister Manish Sisodia said the AAP will participate in the 'EVM Hackathon' to be oraganised by the poll panel later this month and will prove how an EVM can be tampered with.

Sisodia also challenged the Election Commission to allow at least three AAP workers in place of those who service EVMs at store rooms and said they will "completely hack" all machines.

At the special Delhi Assembly session convened by chief minister Arvind Kejriwal, AAP MLA Saurabh Bhardwaj gave a live demo on how EVMs can be rigged.

Ahead of the special day-long session, Kejriwal had said he will disclose the truth about a big conspiracy going on in the country.

Saurabh Bhardwaj started by explaining how different parts of an EVM work and then conducted a mock poll on a voting machine he had carried to the assembly.

He also clarified that the test is being conducted on a machine "similar" to an EVM and not an original EVM.

He said parties use a secret code to sway votes.

Bhardwaj said every constituency has a different secret code which is entered into the EVM around 10 am. All the votes cast after this will go to the selected candidate.

He demonstrated how, despite giving two votes each to various parties, the final count showed that the votes of some parties had been transferred to one party.

"All it takes to rig an EVM is to change the motherboard. All it takes is 90 seconds. It's outrageous," Bhardwaj said.

"I read the Election Commission's site. I read many answers given by them. And we all saw on TV that how in Bhind, in front of journalists, DM, and candidates, any button which was pressed was showing only BJP's ticket. Thankfully the VVPAT was connected with it."

The Election Commission has said that EVMs are tamper-proof. The poll body has called a meeting of all parties on Friday at its Delhi headquarters to address various parties' complaints about voting machines.

"When MCD poll results were announced I had said that we did not lose because of EVM machines. This is just a tactic to shift people's focus," Mishra said.

"First, tell me the reason we lost? Is it because of the EVMs or the water. Till now he doesn't know the reason. Just because he is unable to win elections, he is going against democracy and the whole electoral process," he added.

Leader of Opposition Vijender Gupta, who was marshalled out of the Delhi Assembly today, said, "Why is he demonstrating inside the building. He should have done in the public domain. He is just finding excuses to shift focus away from corruption charges. He should have demonstrated this in front of the election commission."

Vijender Gupta was expelled from the Assembly after he moved an adjournment motion on the AAP corruption issue which was disallowed by the Speaker.

On Sunday, Kapil Mishra had alleged that Kejriwal took two crore rupees from health minister Satyendra Jain against whom the CBI is probing a case of money laundering.

The Central Bureau of Investigation (CBI) said today that Mishra has given three complaints relating to bribery and irregularities against functionaries of the Delhi government.