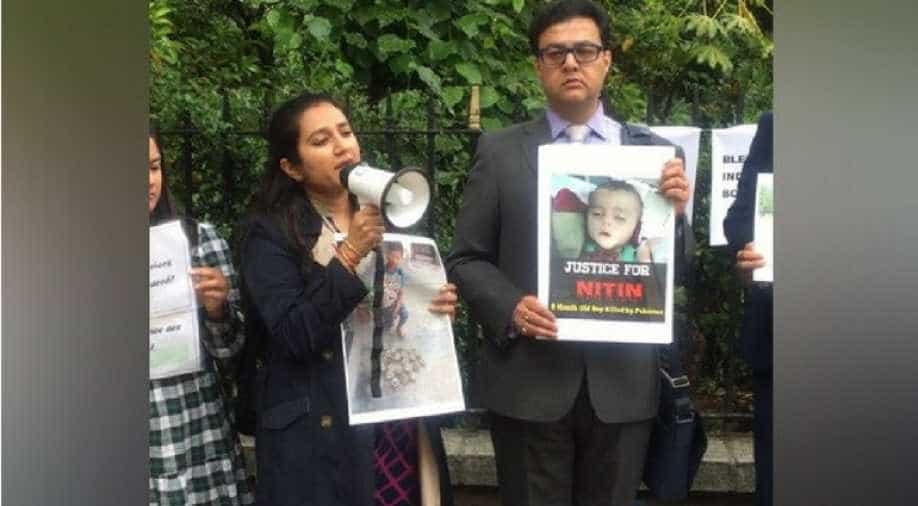 Protestors holding banners to highlights the deaths of an 8-month-old child named Nitin and 8-year-old Krishna in the incidents. Photograph:( ANI )

A community organisation of Dogras, belonging to Jammu and Kashmir staged a protest against ceasefire violations by Pakistan.

The protest was conducted in front of Pakistani High Commission in London in solidarity with the Jammu border villages which Pakistan targets using both small arms fire and heavy calibre weapons, causing extensive damage to both life and property.

The protestors further highlighted the recent deaths of an 8-month-old child named Nitin and 8-year-old Krishna in the incidents of unprovoked firing by Pakistan during the holy month of Ramzan.

The role of Pakistan in creating disturbance in the state of Jammu Kashmir through unprovoked ceasefire violations along the IB and LOC in Jammu, and infiltrations and sponsoring of terrorism to keep the state unstable and its residents in fear.

Anisha Safaya said, "I request the Pakistan authorities to stop bleeding our borders. Stop killing our people. If you (Pakistan) are not perturbed by the killing of eight-year-old, then it is really shameful."

Another protestor said that they will raise their voices against Pakistan at several international forums and will spread the word that Pakistan is a terror-state.