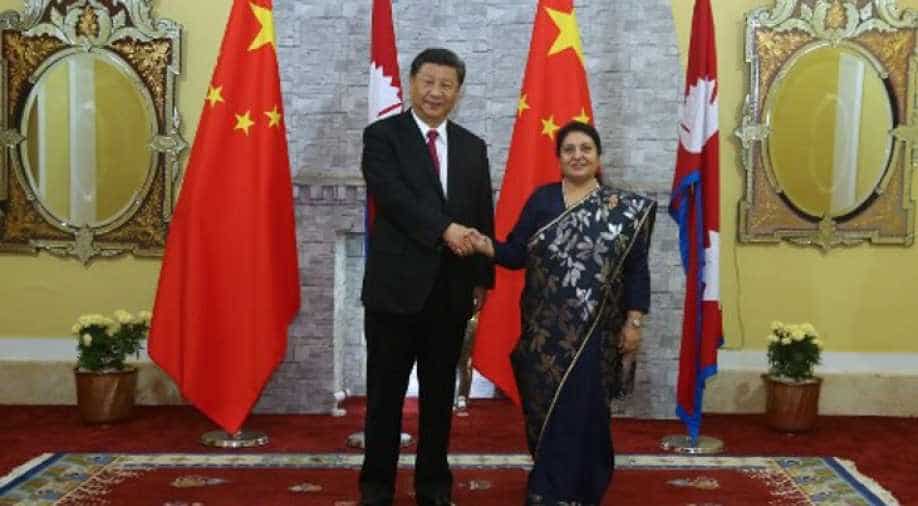 In Nepal, Xi announced the construction of Rasuwagadhi-Chhare-Kathmandu tunnel way and upgradation of Araniko Highway

Just hours after his India visit, President Xi arrived in Nepal on a two-day visit to further trade relations and "enhance connectivity" between the two countries.

Nepal rolled out the red carpet for President Xi as President Bidhya Devi Bhandari received him at Kathmandu airport.

China would carry out a feasibility study on trans-border railways linking Nepal, Chinese President Xi Jinping announced on Saturday. The Chinese President made the announcement during the state banquet held in his honour by Nepal President Bidhya Devi Bhandari.

Xi also stated the construction of Rasuwagadhi-Chhare-Kathmandu tunnel and upgradation of Araniko Highway to be taken up by China. Later on Saturday, Xi held talks with Nepal's ex-prime minister and chairman of Nepal Congress, Sher Bahadur Deuba.

"I am confident that President Xi's visit will take Nepal-China relations to a new high, and the two countries will tremendously benefit from each other in sectors ranging from trade, energy to infrastructure," Deuba tweeted said after the meeting with President Xi.

It was great meeting with President Xi Jinping of China in #Kathmandu this evening. We discussed ways to strengthen the ages-old bilateral ties between #Nepal and #China.1/4

"We also talked about the ties that Nepali Congress always has with Chinese Communist Party for a very long time," Deuba said, adding,"it was also a time to relive the memories of President Jiang Zemin's visit to Nepal during my first tenure as prime minister."

"It is important that we adopt a strategic and long-term perspective and draw up a blueprint for our bilateral relationship to take it to a new height in this new era," Xi told a Nepali newspaper.

On Sunday, Xi will hold talks with Prime Minister K.P. Sharma Oli and other top Nepal leaders before flying back to China later in the afternoon.

President Xi is the first Chinese head of state to visit the Himalayan kingdom in 23 years.