Can India and Pakistan be friends? 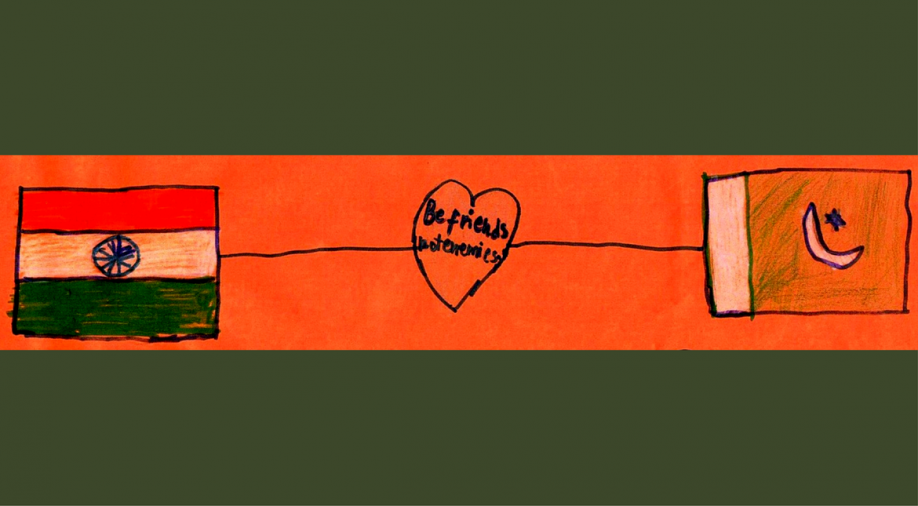 "The only true borders lie between day and night, between life and death, between hope and loss" - Erin Hunter

Are India and Pakistan enemies?  Being an Indian, I sensed the detestation for our neighbour in everyday events. From school books that narrated tales of colonisation, war and partition to the rampage against Pakistan in a cricket match, the dislikeness seemed so ordinary, you never questioned it.The focus of history has always been on India's transition from a British colony to an independent nation and not the creation of Pakistan or the large-scale violence in terms of rape, murder, and displacement. There is the absence of a state narrative that had no connection with people's experiences, therefore, giving no opportunity to build our own understanding by examining different sources of information.

Even though the two nations share linguistic, cultural, geographical, and economic links, their relationship has been plagued by hostility and suspicion. The two countries have fought three major wars, one undeclared war and have been involved in numerous armed skirmishes and military standoffs. There are traumatising memories of the partition in the older generations. Partition is a finished event, not a continuing process.

My grandmother’s family lived on the other side of the border during the partition. She was a teenager when her entire family got killed. She and her elder sister were injured but the two somehow managed to escape. They made the journey to Delhi, where their elder brother lived with his wife. He picked them up from the camp they took refuge in and brought them up along with his own children.

I grew up listening to her stories and reading about the conflicts -- clearest memory most students have is of British's ‘Divide and Rule’ strategy. They did seem to succeed--Even within India, I felt a strong level of hostility between the two major religions.

I, on the other hand, had the closest Muslim friends in school. I love the lamb biryani cooked by my friend Faraz’s mother on Eid--we have been best friends for 16. I did not grow up to be very religious. For me, religions and geographical differences were all about diverse cultures -- and being a food enthusiast, I have been mostly concerned about the dishes they serve.
A Bengali's fish, Muslim's biryani and a Punjabi's butter chicken were the only ways they seemed different--Otherwise, they were a homogenous group of humans. That is an advantage of a metropolitan city -- cultural diversities are a part of our lives -- we have students from all parts of the country in the same classroom, we celebrate all festivals, we share a life beyond the stereotypical classifications based on what god you pray to.
That is one reason it is so hard for me to believe when I hear that a nation got divided into two based on the very reason, but it was a reality I could not ignore.

I grew up with the notion that there is ascertain dislikeness among the general Indian and Pakistani towards each other. There is no peace and there is no scope for it. We live in a complicated world.

I met Chintan Girish Modi on one of my previous work projects. There happened to be a Pakistani couple in the vicinity and Chintan's excitement to run to them for a conversation took me by surprise. From a 30-minute long chit-chat, they discovered they had common friends! It was a happy moment. They seemed like any other average Indian couple to me. Had they not mentioned, I wouldn’t have guessed that they are not Indians.

Chintan told me about his initiative that intends to build friendships between Indians and Pakistanis. Being the so-called ‘broad-minded modern cosmopolitan Delhi-girl’ that I thought myself to be, my instinct reaction (in my head) was a mix of disbelief, amusement, happiness, and amazement. Is friendship possible?--I thought to myself.

He told me tales about Pakistan -- he had recently visited Lahore--I was suspicious--was it even safe to go there? But his enthusiasm stayed with me. Eventually, I became very good friends with Chintan -- he shared several stories about his friends and their lifestyle on the other side of the border.

The realisation struck me--I had never even bothered to inquire what life and culture was like there--I had flown with what was taught to me by the society, unconsciously. I, myself did not have any hostile feelings but the perception in my mind was that India and Pakistan hate each other -- a conclusion I came down to after years of listening to the strongly opinionated, stereotypical society.

Two countries entangled in the bitterness of partition and present political differences forget to realise that they were once one. But there lies a part of our generation that believes we can let the differences go and initiate friendships.

This is where technology plays its beautiful part--it empowers us to make our own decisions and reform our mindsets with real experiences and not what is written in books -- it gives us the capacity to explore.
Chintan’s Aao Dosti Karrein is one such initiative that utilises the power of internet and technology to change the shape of minds.

Is the internet powerful enough to end the decades-long enmity?

Internet is the largest community in the history -- as big as the global population in 1960. It is a technology without borders. It is easy to overlook how the innovation has united the world. Like the internet itself, Facebook is one of the most powerful technologies ever built to increase the connection between people separated by borders of nation, language, religion and culture. India and Pakistan -- separated by decades-old border dispute can explore friendships that would otherwise never develop.

As the world of politics descends into chaos, a rising planetary community is changing lives to bring the world together. Communities are moved by global interests far beyond people's immediate lives.

Friendships can be formed beyond borders, regardless of the differences in political and religious views. There is so much more to us than the god we pray to.

Pakistan has been a part of Chintan’s imagination ever since he was a child.
“When I was a kid, adults asked questions like ‘Where would you like to go when you grow up?’ I would say ‘to Pakistan’. For an Indian child to say this seems quite strange to people. But all I heard about Pakistan when I was growing up was that it is a dangerous place. That the people are mean. I would not come back alive if I went there. I was not convinced. How could a place be all bad? I was curious and wanted to check it out for myself.”

He happened to visit Pakistan during an exchange project. He was moved by the experience, he saw that the friendships formed during this time showed another way to think about Pakistan – quite different from the tone of most media, history textbooks, and news. This was his motivation to begin the initiative, Aao Dosti Karrein:; Friendships Beyond Borders (FAB) “I had a growing urge to make these experiences and opportunities available to other people, to let them participate and interact with folks across the border. I wanted something that would have a wider reach,” says Chintan. “Apart from this, I was visiting schools in India to talk to students about my experiences in Pakistan. All our interactions were based on questions the children had. It was an enriching experience for me as well. I began to think about combining social media and interactions with young people. That’s how FAB started. It has no funding and I co-ordinate it pretty much single-handedly. However, FAB owes tremendously to friends who have volunteered their time and support, and organized speaking engagements.”

Messages from Indian students to Pakistan after the attack on army school in Pakistan (Image Courtsey: Aao Dosti Karrein) (WION)

The project has contributors and volunteers of diverse backgrounds including a poet, a journalist, an arts manager, a historian, a filmmaker, and students from Jawaharlal Nehru University in Delhi. These experiences speak to both human relationships and the idea of peace itself, understood all too often in abstract ways.
A part of the motivation for FAB is to show the different forms that peace can take, and provide alternatives to the powerlessness that people feel towards these daunting issues. “Even as an individual, one could be transformed. What you and I can do is make friends even if we can’t sign treaties.”

These are relationships that the internet enables and makes that much easier.

Devika Mittal is a Ph.D. student in the Department of Sociology at the Delhi School of Economics. (WION)

Aliya Harir has a Masters in International Relations from Quaid-i-Azam University, Islamabad. (WION)

He has facilitated Skype interactions between children from both countries and even documented friendships that blossomed through Facebook messages.
“The social media boom, in particular, has made it possible for Indians and Pakistanis to get to know each other using Facebook, Twitter, WhatsApp, Skype, Instagram and many other platforms even when the visa regime makes physical travel difficult.”

“With some maturity and foresight, and an unflinching commitment to the well-being of their citizens, India and Pakistan can certainly resolve all their differences. This resolution is in the best interests of their economies too. Much of what is being spent on defence could be spent on education, food security, and climate action”

From documenting such stories, FAB has ventured into peace education workshops in schools, colleges, offering translations of stories in multiple South Asian and European  languages and into collaborating with multiple partners to run campaigns and events that would introduce new audiences to the possibility of cross-border friendships and celebrate our shared humanity and our heritage

“Education can be a powerful preparation for citizenship. It can equip students to appreciate cultural diversity, and build skills for conflict transformation in non-violent ways” he adds

Is the enmity only on papers, and not in our hearts?

When I asked people around me about the first word that comes into their mind when they hear Pakistan, I was quite amazed by the positive answers:“Culture”, “friendship”, “coke studio”, “lahore fort”, “same as us”, “sufi music”, “delicious food”, “serials on Zindagi”, “cricket matches,” were the most common answers.

It got me curious to understand how we perceive each other, especially the urban youth. I conducted a simplistic survey in my personal capacity. I circulated the survey form in universities and workplaces in top metros of India and Pakistan. The results were overwhelmingly pleasant and just re-established my faith in peace, love, friendship and amendments.

Both countries are willing to have friends on the other side of the border. (WION)

As an unknown writer beautifully puts ‘Maybe love is not always about trying to fix something that is broken. Maybe it’s about starting over and creating something better.’

To a hopeful generation that believes in peace.