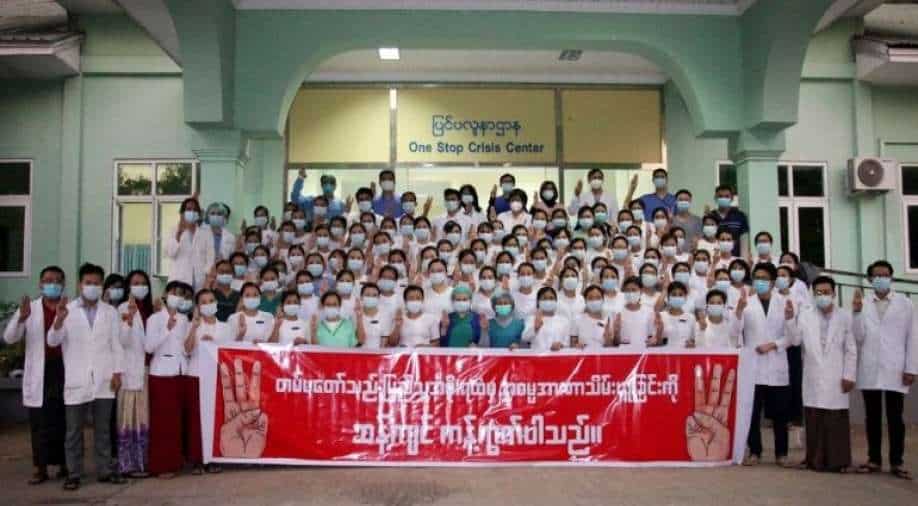 Medical staff hold up a three-finger salute and a banner that reads they "oppose the military coup against the people" during a protest against the military takeover, at a hospital in Naypyidaw on February 5, 2021. Photograph:( AFP )

The country has been in turmoil since the military ousted civilian leader Aung San Suu Kyi on February 1, bringing an abrupt end to Myanmar's short-lived experiment with democracy

The country has been in turmoil since the military ousted civilian leader Aung San Suu Kyi on February 1, bringing an abrupt end to Myanmar's short-lived experiment with democracy.

The power grab triggered a massive uprising that authorities have tried to quell with lethal force and live ammunition.

As Myanmar entered its fourth month under military rule on Saturday, protesters in commercial hub Yangon, an epicentre of unrest with a heavy security presence, staged flash demonstrations, marching rapidly through the streets to avoid confrontation with police and soldiers.

The lightning-quick pace of the protests is "so that people will have time to disappear when the security forces come, or else they would die or get arrested", said student activist Min Han Htet.

In Yangon's Insein township, a bomb blast went off around 10 am near a local school, said a resident staying nearby.

"Some security forces came to check the blast area, but I only watched from a distance from my home because I was worried they would arrest me," he told AFP.

By afternoon, two more blasts went off in Yankin, further south, according to residents of the leafy residential township.

"I thought it was thunder," a resident told AFP, adding that the explosions left the security forces nervous.

The state-run evening news said a woman was wounded in the Yankin blasts, which it blamed on "instigators".

No one has yet claimed responsibility for the bombings that are taking place with increasing frequency in Yangon.

They made people live in fear'

The former capital has utterly transformed since the junta seized power on February 1, with barricades erected in key protest hotspots, security forces on patrol, and residents reporting nighttime arrests of suspected dissidents.

"They (the junta) have made people live in fear and it is good to have them on edge as well," the Yankin resident said.

He also praised the flash protesters for their ingenuity in evading arrest and crackdowns.

"Any show of defiance without getting captured or killed is great for the resistance."

Across the country, nearly 760 civilians have been killed in the anti-coup unrest, according to a local monitoring group, though the junta has recorded a far lower death toll.

But the democracy movement remains undeterred, with demonstrators gathering Saturday in central Monywa city, a flashpoint for violence carrying signs that said, "Monywa cannot be ruled".

He has continuously justified the putsch as necessary to protect democracy, alleging fraud in November's election which Suu Kyi's party won in a landslide.

The unceasing violence against protesters has drawn the ire of some of Myanmar's myriad ethnic armies, many of which have been battling the military for decades in border regions.

Several have condemned the military and come out in support of the anti-junta movement, offering shelter to fleeing activists in the territory they control.

Clashes between the military and the Karen National Union (KNU), one of the leading rebel groups, have escalated since the coup.

The KNU has seized and razed military posts and the junta has responded with repeated airstrikes in the rebels' Karen state heartland, the latest taking place right after midnight Saturday.

The targeted area is right next to Thailand's northern Mae Hong Son province, and displaced residents have fled across the Salween River, which demarcates the border.

He added that more than 2,300 Myanmar nationals have crossed into Thailand.

Media and local Karen aid groups were blocked access to the refugees, with authorities citing the spread of Covid-19 as a reason, stopping to check the temperatures of locals returning home.

Violence has also flared in Myanmar's northern Kachin state between the Kachin Independence Army and the military, which launched airstrikes in Momauk township Friday.

Saturday saw fresh artillery shelling hit two small towns, according to a humanitarian worker, who said residents were fearful about the fighting getting closer.