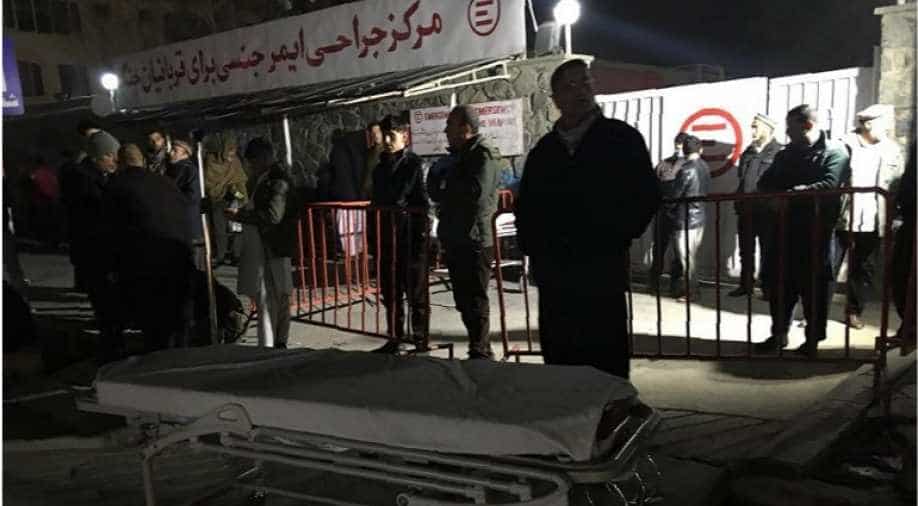 Afghan relatives and medical staff wait for victims outside an entrance gate of the Emergency Hospital after a car bomb exploded near a foreign compound in Kabul, January 15, 2018. Photograph:( Reuters )

The explosion took place on Jalalabad Road in eastern Kabul, near a district that is home to international company and NGO offices.

A car packed with explosives blew up near a heavily fortified foreign compound in Kabul on Monday, killing at least four people and wounding more than 90, officials said, in the latest deadly attack to rock the Afghan capital.

There was no immediate claim of responsibility for the huge blast, which shook the sprawling city, but it comes as diplomatic efforts to end the 17-year war with the Taliban gather pace.

The explosion happened near Green Village, a highly secure compound close to a busy road and residential neighbourhoods in the east of the city.

There are fears the toll could rise.

Three of the dead were members of the security forces and one was a civilian. Most of the wounded were civilians, who have long borne the brunt of the Afghan war.

Until recently some UN staff had lived and worked at the compound, which is protected by cement blast walls, but Danish said the area was now largely empty and "only a number of guards" were left.

"Special police forces' units have been deployed to the site to check if there are more attackers."

Afghanistan's customs office and headquarters for the Independent Election Commission, which has previously been targeted by militants, are also nearby.

The explosion happened in the early evening when traffic is normally heavy.

The last assault on a foreign compound was in late November when a Taliban-claimed vehicle bomb exploded outside the compound of British security firm G4S, killing at least 10 people.

Five G4S employees were among the dead.

That was followed by a suicide and gun attack on a government compound in Kabul on December 24 that killed at least 43 people, making it one of the deadliest assaults on the city last year.

The latest bombing comes as US peace envoy Zalmay Khalilzad visits the region for further meetings aimed at bringing an end to the war in Afghanistan, which by some estimates was the world's deadliest conflict zone in 2018.

Khalilzad, who met Taliban representatives last month in Abu Dhabi, is travelling to Afghanistan as well as China, India and Pakistan on the trip lasting through January 21.

Last month's leaking of US President Donald Trump's plan to slash troop numbers in Afghanistan, however, has threatened to derail those efforts and alarmed many Afghans who fear a return to oppressive Taliban rule.

The recent flurry of activity to get the Taliban to the negotiating table has caused disquiet in Afghanistan, with the government feeling sidelined from the discussions.

The Taliban has repeatedly refused to talk to Kabul, which it sees as a US puppet and ineffective.

Afghan security advisor Hamdullah Mohib is touring the region for talks with key powers, including China.