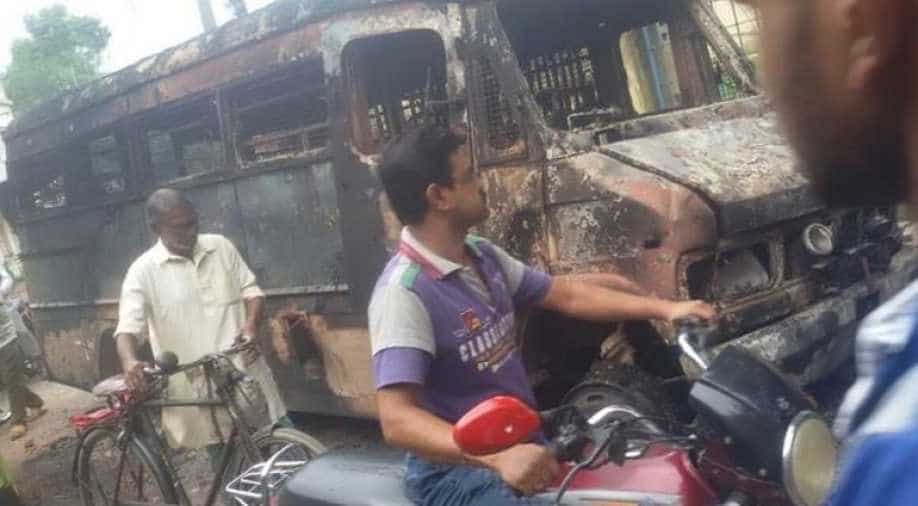 File photo of the violence in Baduria. Photograph:( DNA )

A BJP central team comprising party MPs Meenakshi Lekhi, Om Mathur and Satyapal Singh were detained after a heated exchange with the police ||Yesterday,?BJP's member of parliament Roopa Ganguly and other leaders were detained while on their way to the strife-torn district

BJP leaders on Saturday met West Bengal Governor KN Tripathi over the violence in riot-hit Basirhat and in Darjeeling and demanded the imposition of President's rule, alleging that the law and order situation in the state had "completely broken down".

"Today we met the governor and informed him about the grim situation in the state. The state government in collaboration with anti-national elements is directly responsible for the complete breakdown of the law and order situation. We have requested the governor to talk to the central government and send the recommendation for imposition of President's rule in the state," state BJP president Dilip Ghosh told the press.

He accused West Bengal government of pursuing "politics of appeasement" with an eye on the minority votes in the state.

The party also rubbished West Bengal Chief Minister Mamata Banerjee's allegations that the BJP-led federal government is not cooperating with the state government.

"This is a complete lie. It was the central forces which helped her to come down from the hills when the agitation first started. The Centre has extended all help. In Baduria, the Centre wanted to send more forces but it was the state government which declined," he said.

The federal government has sent four companies of the Border Security Force to Basirhat which has been on the boil since Monday.

Sources in the Ministry of Home Affairs told PTI that that four additional companies that were sent two days ago were sent back by the state government.

The three Members of Parliament, who left for Basirhat after arriving here from Delhi, were stopped by the police near Birati, close to the airport.

Meenakshi Lekhi questioned the police why they were not being allowed to visit Basirhat if the situation there under control, as claimed by the state government.

"We are MPs and only we three will go there. You accompany us," she said.

The police, however, refused to allow them, PTI reported.

She also accused the Modi government and the BJP of trying to "disturb peace" and "destroy" the federal structure by allowing people from across the border to enter the state and vitiate the atmosphere.

"How can some people from across the border intrude and start disruptions here? Who is in charge of border security, the Centre or the state? Once again I am saying, it is the ploy of the BJP to disturb the peace of the state," she said.

The chief minister said the law would take its own course and strict action would be taken against those behind the riots.

"We have decided to order a judicial probe into the Baduria and Basirhat riots. We want to see who were involved and the state government will provide every input to the judicial commission. Let there be an impartial probe," Mamata Banerjee said.

Commenting on attempts by political parties to visit the riot-hit areas, the chief minister said, "Where is the need to disturb the people there? Let them settle down. Trinamool MPs did not go. They could have gone also".

North 24 Parganas Superintendent of Police Bhaskar Mukherjee has been removed after the violence and has been replaced by C Sudhakar.

Man arrested for uploading photograph of scene from film

A man was arrested on Friday from South 24 Parganas's Sonarpur for allegedly trying to incite communal violence, the police said today.

38-year-old Bhabatosh Chatterjee was arrested from his residencefor uploading a still photograph of a scene from a film on social media and claiming that it was an image of Baduria.

West Bengal Police has issued a series of tweets cautioning people "not to pay heed to malicious videos aimed at creating mistrust among communities."

Some people are spreading fake violent videos as incidents of West Bengal. Please check Facts with us...(1/2)

(2/2)... We appeal to all to not to pay heed to these malicious videos aimed at creating mistrust among communities.

Shops and markets reopened in Baduria and adjacent areas on Saturday and vehicles started plying as locals came out like other normal days.

No untoward incident was reported from anywhere in the district since yesterday, a senior home department official said.

A large number of police personnel and paramilitary forces would continue to be deployed in the troubled areas which were peaceful since yesterday, the official said.

Tension in Basirhat had flared up again on Thursday with police lathicharging protesters who were blocking a road. One person, who had been injured and taken to a hospital in Kolkata, died after three days.