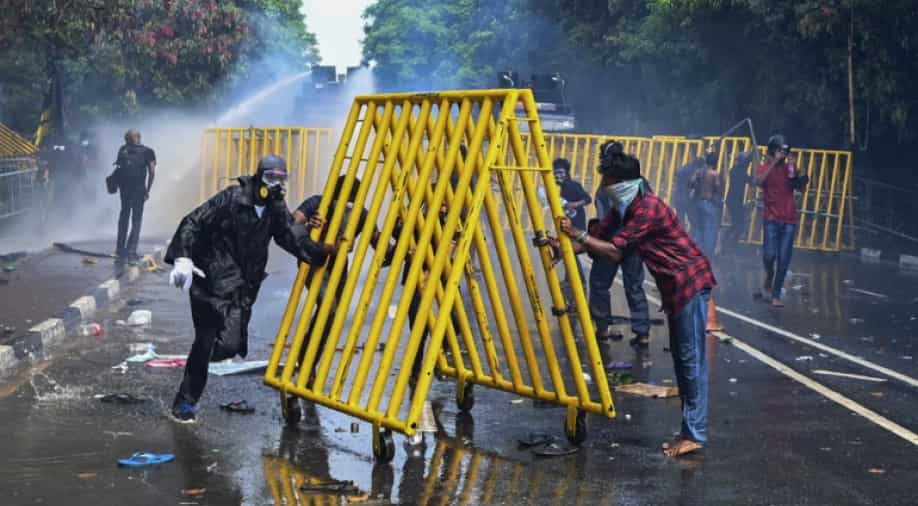 Police use tear gas and a water cannon to disperse university students protesting to demand the resignation of Sri Lanka's President Gotabaya Rajapaksa over the country's crippling economic crisis, near the parliament building in Colombo Photograph:( AFP )

Following an escalation in anti-government protests with demonstrators attempting to storm Sri Lanka's parliament, the president declared a state of emergency

Expressing 'grave concern' about the state of emergency, the Bar Association of Sri Lanka has called on President Gotabaya Rajapaksa to repeal it.

"We call upon His Excellency to revoke the proclamation declaring a state of emergency and to ensure that the fundamental rights of the people... are respected and protected," the BASL said in a statement.

Following an escalation in anti-government protests with demonstrators attempting to storm Sri Lanka's parliament, the president declared a state of emergency.

According to a statement released by his office, "The President has taken this decision due to the public emergency situation in Sri Lanka and in the interests of public security, the protection of public order, and the maintenance of supplies and services essential to the life of the community."

Sri Lanka, a South Asian island nation with a population of 22 million, has been facing its worst economic crisis since its independence.

The country has defaulted on all of its foreign debt and doubled its interest rate as it is seeking help from the International Monetary Fund for a bailout.

United States ambassador to Sri Lanka Julie Chung said in a tweet "Concerned by another state of emergency. The voices of peaceful citizens need to be heard."

"Every adult must act with a sense of responsibility and avoid exposing children to any form of violence, including during protests," aid agency UNICEF said.

Masahiro Nozaki, the IMF's mission chief for Sri Lanka, said on Saturday that the international financial institution will meet with Sri Lankan officials in a virtual meeting beginning on Monday.