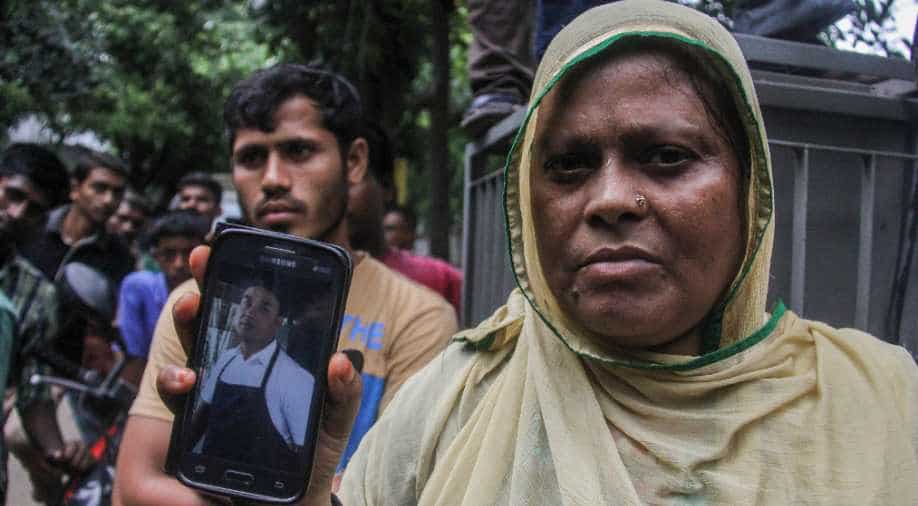 ?A woman shows a photo of her brother-in-law, Saidul, an employee of Holey Artisan Bakery cafe, which was attacked by gunmen on July 2 in Dhaka. Photograph:( Reuters )

Follow Us
Bangladeshi Prime Minister Sheikh Hasina paid homage to the victims of the Gulshan attack at the Army Stadium in Banani on Monday morning.

The 12-hour-long hostage crisis had ended on Saturday morning after a two hour assault by commandos, leading to the death of six gunmen and capturing one alive. Nine Italians, seven Japanese, one Indian, one Bangladeshi American and two Bangladeshis were among the 20 killed in the terror attack at Holey Artisan Bakery in Gulshan on Friday night.

While Salauddin was laid to rest at Banani Graveyard in Dhaka, Robiul was buried at her village home in Manikganj. Meanwhile, security continues to be tight at all sensitive points in the capital, with police checking all vehicles especially in the secured diplomatic area where the gruesome hostage killings took place.

In the wake of the terror attack in Dhaka, US secretary of state John Kerry had also called the Bangladeshi Prime Minister and offered her assistance from American law enforcement agencies, including the FBI. State department spokesperson John Kirby said that the secretary on Sunday encouraged Bangladesh to conduct its investigation in accordance with the highest international standards and offered immediate US assistance in this regard.