Bangladesh: One killed in protest against Chinese-backed power plant 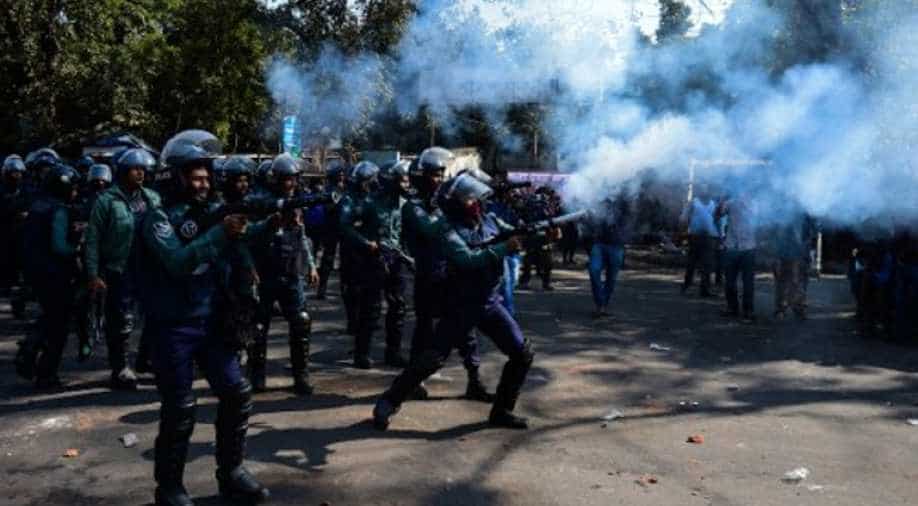 Bangladeshi police fire tear gas shells towards demonstrators during a strike to protest the construction of a coal-fired power plant in Dhaka on January 26, 2017 Photograph:( AFP )

A protest against a $2.4-billion Chinese-backed power plant in Bangladesh turned violent, killing one person and injuring about a dozen, risking delay to a project seen as a symbol of warming ties between the two nations.

The coal-fired plant being built 265 km (165 miles) southeast of Dhaka, the capital, is a major draw for foreign investment in Bangladesh, and is expected to begin power generation by the end of 2019.

Police said security forces were guarding the site on Thursday to prevent disruption to construction work that villagers fear will force several evictions, disturb graveyards where relatives are buried, and damage the environment.

"There is an uneasy situation, and police are patrolling the area to avoid any further clashes," said Alamgir Hussain, an official of the Banshkhali police station near the plant site.

Protesters were chanting slogans on Wednesday when project supporters attacked them, said Nurul Mostafa, a leader of the group that wants the plant shifted.

About a dozen people were injured in the clashes. A similar protest last year led to the deaths of four demonstrators, halting work on the plant.

Such protests risk delaying the project and hamper fund-raising efforts, said a senior official of conglomerate S Alam Group, which has a deal with China's SEPCOIII Electric Power Construction Corp to build the 1,320-MW plant.

"We hope to resolve the problem soon, otherwise we may not be able to finish our project in time," said the official, who declined to be identified because he is not authorised to speak to the media.

Chinese banks are expected to provide 70 per cent of the projected investment, he added.

The plant will use the "most sophisticated technology" to reduce its environmental impact, said Masud Alam, chairman of the Bangladesh conglomerate, who offered to help with medical treatment for the injured.

Late last year, China signed 27 pacts worth billions of dollars with the south Asian nation, as it steps up a competition with India to build regional influence. It is also seeking to boost investment in another of India's neighbours, Sri Lanka.