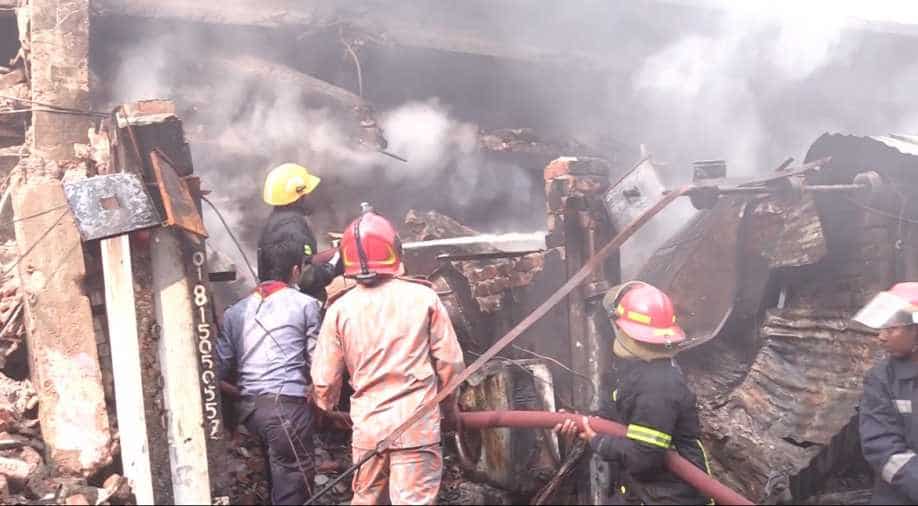 The scene of the fire at the City Corporation wholesale market in Dhaka today. Credit: Golam Rabbi, WION. Photograph:( WION )

A major fire broke out at the wholesale Dhaka City Corporation (DCC) market in the Gulshan-1 area of the Bangladeshi capital early this morning.

Twenty-two units of the fire service and civil defence were deployed to douse the fire which had not been brought under control eight hours after it started.

No casualties have been reported so far and the cause of the fire has not yet been ascertained. The fire broke out around 1 am local time.

"The fire broke out from the eastern part of the market which stores stationeries and cosmetics. The fire is being difficult to bring under control due to the plastic materials inside the market," said Al-haj Mohammed Ullah, owner of La-Sany Furniture at DCC Market.

The eastern half of the market, consisting of close to 300 shops, has been completely damaged, Mohammad Shahidul Islam, publicity secretary of the DCC shop owners' association, told WION.

The wholesale market is popular with people looking for imported fast-moving consumer goods.

Shop owners told WION the fire service had not had enough water to put out the fire.

One of the owners of the Bismillah Bedding Store, Gias Uddin, told WION that plumes of smoke were still being seen.

"I arrived at 3:45 am at the market and the fire service did not come prepared. They ran out of water a minute after starting the water pipes," he said.

The fire also spread to the western half of the market which stocks furniture and crockery and where another 236 shops are feared damaged.

"The fire is still concentrating inside the collapsed buildings where water is being difficult to reach and is spreading to other parts of the market," said Samarendra Nath, deputy director of the fire service and civil defence.

Bangladesh has suffered major fires in shopping malls and garment factories, in which hundreds of lives have been lost.

Last August, a fire at Dhaka's Bashundhara City shopping complex, one of the largest shopping malls in South Asia, burned down at least 100 shops on the fifth floor of the market.