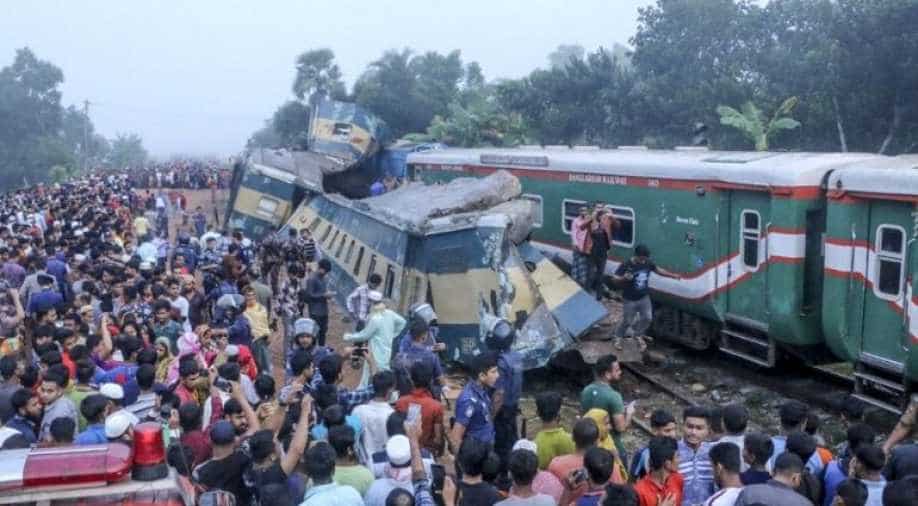 Two packed trains rammed into each other in Bangladesh on Tuesday, killing at least 16 people and injuring nearly 60 others, police said.

Three coaches were sent crashing off the tracks at Mondobhag station in the town of Kasba when a Dhaka-bound train and a locomotive bound for Chittagong collided.

"At least 16 people have been killed. And another 58 were injured. We have sent the injured to different hospitals in the region," local police chief Anisur Rahman told AFP.

Cranes and other lifting gear were brought in to rescue trapped passengers, many of whom were asleep when the early morning crash took place.

"There was a loud noise, then I saw the train was completely ripped apart," one injured passenger told Somoy TV.

"All the people around me were crying. There was blood everywhere. Some people had broken hands and legs," another told the broadcaster.

"My son was with me. I still don't know what happened to him," the man added.

Hayat Ud Doula Khan, a government official in the district, said the Dhaka-bound Turna Nishitha train, hit the Chittagong-bound Udayan Express at about 3:00 am as the Udayan was about to go through Mondobhog station.

Khan told AFP that the Turna Nishitha should have waited outside the station to let the other train pass and that an investigation had been started. A Bangladesh railway official told reporters faulty signals could be to blame.

"Three coaches were badly mangled and the victims are from these coaches," Khan said, adding that train services out of Dhaka had been halted because of the accident.

Train accidents are common in Bangladesh and are often caused by poor signalling or other rundown infrastructure.

According to the Shipping and Communication Reporters Forum (SCRF), a private media research group, between January 1 and June 30 this year, at least 202 rail accidents took place in the South Asian country of 168 million people where some of the track is a century old.

In June, a train plunged into a canal after the bridge it was crossing gave way. Five people were killed and 100 injured.

The SCRF said pedestrians using mobile phones while crossing tracks, negligence by railway employees and poor maintenance of lines and bridges were the main cause of crashes.