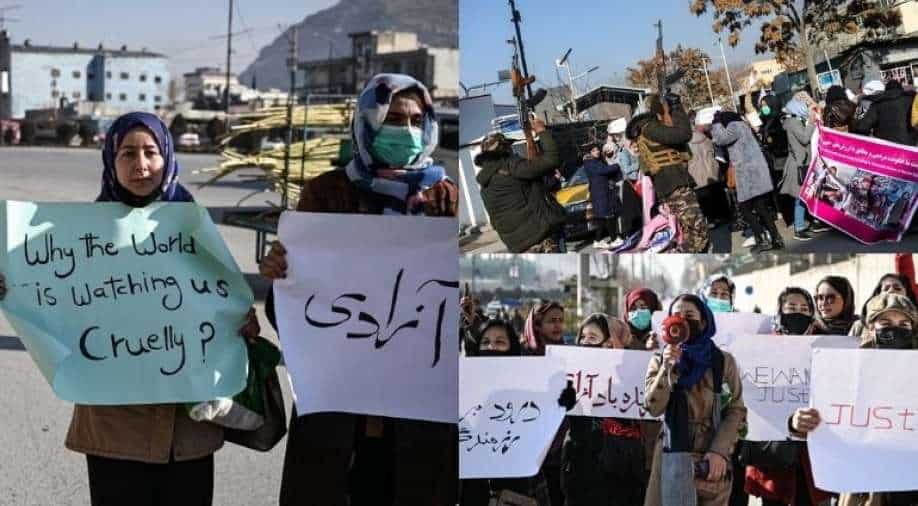 In this combination of images, Afghan women can be seen protesting against the killing of former troops and demanding equal rights Photograph:( Agencies )

Gulf envoys stressed Monday that women must be able to work and go to school, in talks with the Taliban foreign minister as Afghanistan's hardline Islamic rulers made a new bid to unblock foreign aid.

Amir Khan Muttaqi, a key member of the Taliban leadership that took over Kabul six months ago, met in Doha with ambassadors from the six-nation Gulf Cooperation Council (GCC) on the first full day of his latest mission, where he is also to hold talks with European envoys.

The Taliban have been struggling to unfreeze billions of dollars of assets abroad and get sanctions lifted as it faces pressure over its treatment of women and supporters of the Western-backed government toppled last year.

The Taliban tweeted pictures of the smiling foreign minister entering Monday's meeting with representatives from Bahrain, Kuwait, Oman, Qatar, Saudi Arabia and the United Arab Emirates. But diplomats said no promises were made by Afghan officials inside.

Arab envoys emphasised the need to help Afghanistan's "urgent humanitarian needs" as the country confronts widespread hunger caused by drought as well as an economic crisis that has driven up chronic unemployment, said a GCC statement.

While highlighting that there should be "non-interference" in Afghanistan's affairs, they "stressed" the importance of a national reconciliation plan that "takes into consideration the interests of all components of society and respects basic freedoms and rights, including women's right to work and education".

The ambassadors also raised fears that "terrorist groups may be able to launch attacks from Afghanistan's territory against other countries".

They insisted that the country must not be exploited to fuel the illegal drugs trade.

Muttaqi, who is to hold a key meeting with European nations and other international representatives on Wednesday, made no comment after the meeting.

No country has yet recognised the Taliban government and the latest talks came only days after President Joe Biden said that $7 billion held in US banks would be split between a fund to aid Afghanistan and to compensate victims of the September 11, 2001 attacks.

European governments and international finance institutions are also holding back billions in aid.