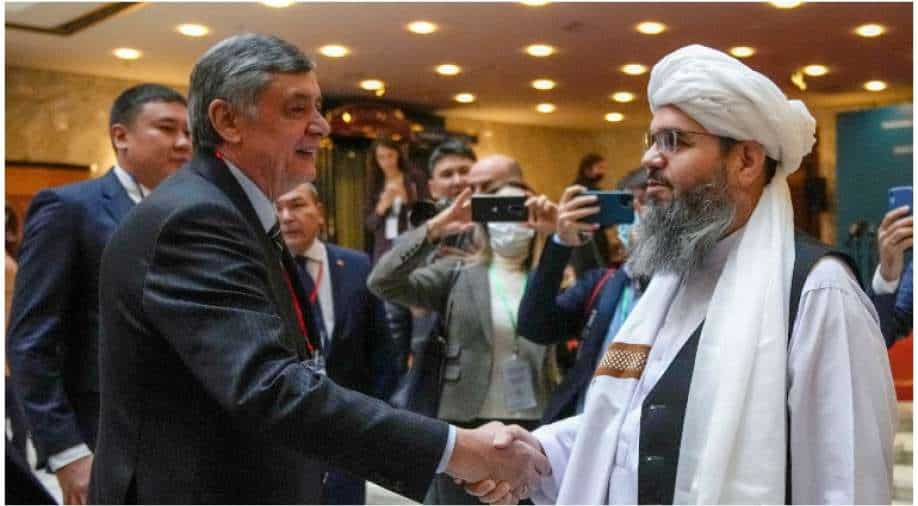 Russian presidential envoy to Afghanistan Zamir Kabulov shakes hands with a representative of the Taliban delegation Mawlawi Shahabuddin Dilawar before the beginning of international talks on Afghanistan in Moscow, Russia, October 20, 2021 Photograph:( Reuters )

Russia is eager to fill the power vacuum created by withdrawal of US forces from Afghanistan. Russian fears include spillage of instability in Taliban-ruled Afghanistan into central Asian countries that were part of Soviet Russia

Russia on Wednesday called for humanitarian support to Afghanistan as it hosted the Taliban for an international conference. Russia regretted that the US was not part of the discussion. Washington has skipped the Moscow meeting citing technical reasons but has said it plans to join similar talks in the future.

“We are convinced that it is time to mobilise the resources of the international community to provide Kabul with effective financial humanitarian support, including to prevent a humanitarian crisis and reduce migration flows," Russian Foreign Minister Sergei Lavrov told reporters before the start of talks with Taliban, Chinese and Pakistani officials.

Russia's keenness to hold talks is partly inspired by its attempt to fill the power vacuum created by withdrawal of US forces from Afghanistan. Russia fears that any instability in Afghanistan may spill over to central Asian countries which were part of the Soviet Union.

Moscow is also concerned about possible flow of migrant flow.

“We call on the Taliban movement – and we discussed this with their distinguished delegation - to prevent the use of Afghanistan’s territory against third countries, most importantly neighbours," Lavrov said.

Russia fought its own war in Afghanistan in the 1980s and has close military and political ties with former Soviet Central Asian states that border Afghanistan.