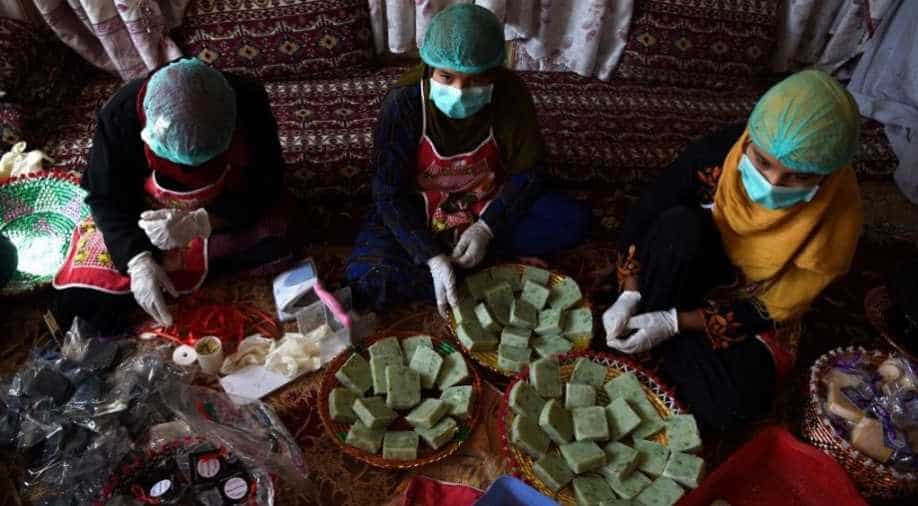 She is one of about 20 female employees -- many of them recovering drug addicts -- working part time on an organic farm in Kabul, where they grow flowers and plants to turn into sweet-smelling soaps and creams.

A young Afghan mother of seven sits on a red woollen rug alongside four other women who are slicing huge slabs of handmade, flowery soap into smaller bars.

She is one of about 20 female employees -- many of them recovering drug addicts -- working part-time on an organic farm in Kabul, where they grow flowers and plants to turn into sweet-smelling soaps and creams.

The venture can be a lifeline in a patriarchal country that grows roughly 90 per cent of the world's illicit opium. Millions of Afghans struggle with drug addiction, and women addicts face particular discrimination.

"I am happy that I am working here because it's all women. There are no men here," said the mother, who requested anonymity, as she sat on the mini production line, tying ribbons around newly bagged soaps made from a type of charcoal that supposedly has special health benefits.

The business is the creation of local entrepreneur Marghuba Safi, who started making soaps and creams in her kitchen in 2016. Friends and family reacted so well to the products that she launched a full-time business with the help of the United Nations Office on Drugs and Crime (UNODC).

The agency paid for Safi to visit India, where women-owned ventures are commonplace, to seek inspiration from small businesses.

"A lot of women over there are working from their homes, and I visited women making their own businesses," said Safi, 40.

"When I came back I decided to make my business a little wider," she added.

Her large farm -- which grows corn, peppers, aloe, marigolds and other plants -- is hidden behind a non-descript metal gate on the outskirts of Kabul.

The only condition for UNODC's support was that Safi hired recovering women drug addicts.

"When I became sad, I went to my neighbour's home and then we ate something," explains the young mother on how she got hooked.

"I did not know what it was but it made me relaxed. After that they took me to the hospital then Marghuba (Safi) came and taught us how to make soaps and helped us."

According to data from 2015 -- the last year a comprehensive national survey was carried out -- Afghanistan had about three million drug addicts, a huge proportion of the country's estimated 35 million people.

About 20 per cent are women, and the rate of addiction has only gone up over the past four years, said Anubha Sood, a senior officer with UNODC's "Alternative Livelihoods and Counter Narcotics" programme.

"The rate (of addiction) is increasing much, much more among women and children in the past few years," Sood said.

The go-to drug is opium -- whether in smoked or in tablet form -- and women are sometimes kicked out of the home as a punishment for seeking help.

"A lot of women who we work with, once they undergo treatment in the drug treatment centre there is a stigma attached and a lot of families do not accept them back," Sood said.

If a woman "is able to stand on her own feet and is able to support herself and her children, this is a big moral boost for herself and she can earn a living in a very dignified manner".

The mother on the production line, aged 30, said she was paid about $2 for a half day's work -- a small but meaningful sum in a country where more than half the population lives below the poverty line of $1.90 a day.

"When I am bringing money to the house, I feel proud that I am also taking part in the economy of my family," she said.

Sood said the UNODC was helping other Afghan women in the provinces through "alternative development" projects such as small-scale vegetable or poultry farms that are easy to manage in a country where women were systematically denied an education under the Taliban and where girls' access to schooling is still limited.

Such projects are "simpler and easier for women to handle. They don’t have to venture out that much, it can be run from the household itself and they can sell the product at the (local) market," Sood said.