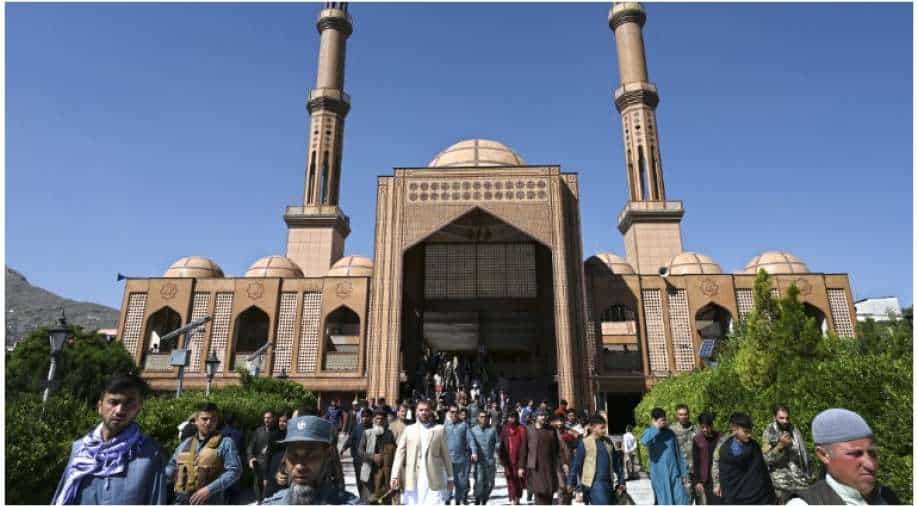 Muslim devotees leave the Abdul Rahman Mosque after offering prayers on the Eid-al-Fitr festival marking the end of the Islamic holy fasting month of Ramadan during a three-day ceasefire agreed by the warring Taliban and Afghan forces, in Kabul on May 13, 2021. Photograph:( AFP )

If the ceasefire holds, it will be only the fourth pause in fighting in nearly 20 years of conflict

A three-day ceasefire between Taliban and Afghanistan government came in force as the country celebrated Eid al Fitr on Thuesday. The ceasefire is a respite for Afghans as they celebrate the Muslim festival with friends and family. The truce was proposed by the Taliban and matched by the Afghan government.

If the ceasefire holds, it will be only the fourth pause in fighting in nearly 20 years of conflict.

Early on Thursday, Afghan men, women and children around the country flocked to mosques or gathered in open grounds to offer morning prayers at the start of Eid festivities that would last until Saturday.

Security personnel were deployed to prominent mosques. Worshippers were frisked as they arrived for morning prayers.

Crowds of Kabul residents later packed the capital's main zoo and parks as they celebrated the festival with families, with only a few wearing masks to protect from the coronavirus.

"I feel so relaxed and peaceful today because it is Eid and there is no fighting," said Mirajuddin, who like many Afghans goes by one name, who was visiting Kabul zoo with his five children, all dressed in new clothes.
Kabul resident Mohammad Sadeq said there was no more justification in fighting.

"This is no more jihad as the Americans are leaving. Now it is brothers killing brothers because both the Taliban and security forces are Afghans," he said.

'War is not a solution'

Amir Jan Sulaimankhil, a resident of the restive Nangarhar province that has seen several deadly attacks, said the Taliban and government should agree on a permanent ceasefire.

"That will make us happier, as many more lives will be saved," he said.

President Ghani used his annual Eid address to urge the Taliban to agree to a lasting truce now that international troops were leaving.

"We don't want you to surrender, but we want you to accept a political solution. War is not a solution," he said.

Tens of thousands of Afghans have been killed and millions have been displaced by the nearly two-decade-old conflict, which has seen a resurgent Taliban take hold of large swathes of the country.