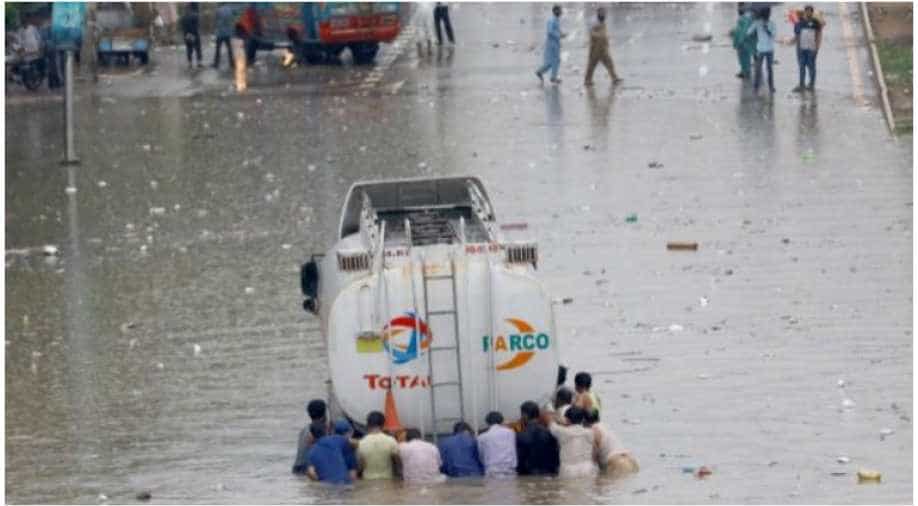 The meteorological department further said Karachi has received 223.5 mm of rainfall in just 12 hours on Thursday alone, making it the highest amount of rain recorded in the city.

At least 19 people have been killed in various rain-related incidents in Karachi on Thursday, as per officials. However, the overall toll due to the monsoon stood at 30.According to Dawn, meteorological officials state that the rainfall in August has have broken an 89-year-old record with 484mm of rainfall over the last month.

The meteorological department further said Karachi has received 223.5 mm of rainfall in just 12 hours on Thursday alone, making it the highest amount of rain recorded in the city.Due to the floods, a 30-year-old man was electrocuted to death in Landhi area, Edhi services informed. Pakistan Navy had also recovered the body of two persons from Shah Faisal Town and Korangi Crossing areas.

However, the Navy had also rescued 55 people trapped in the areas of Malir and Korangi Crossing while 20 families were stranded in Sammoo Goth were also evacuated.Dawn further reported that an army flood emergency control centre was established in Karachi while the medical camp was set up in the district centre of Gulberg, Liaqatabad and New Karachi for giving medical care, said the Inter-Services Public Relations.

"My government is fully cognizant of the suffering of our people in the wake of the heavy rains, especially the people of Karachi. I am personally monitoring the relief and rescue operations and am in constant contact with Chairman NDMA and Governor Sindh for regular updates," tweeted Pakistan Prime Minister Imran Khan.

"Have directed Chairman NDMA to immediately not only rescue stranded people, but also provide emergency medical assistance, food & shelter to all those in need. I have also asked NDMA Chairman to ensure restoration of utilities on an emergency basis," he tweeted further.

He said the government has "not abandon the people of Karachi in their time of crisis".

"We will be announcing a plan for a permanent solution to the problems caused by floods by cleaning of nullahs, fixing of the sewage system & resolving the huge challenge of water supply to the people of Karachi. We will not abandon the people of Karachi in their time of crisis," Khan added.

However, the recently inaugurated Bus Rapid Transit (BRT) project in Peshawar city of Pakistan`s Khyber Pakhtunkhwa province is facing criticism by the people after the stations got flooded and witnessed water leakages during heavy rains.

Several videos are going viral on social media showing water leakages at the stations.The BRT project is constructed by a consortium led by China Railway 21st Bureau Group and it has witnessed several accidents since its inauguration on August 13.

#BRTFlopProject is now trending on social media as people have been criticising Khan`s government for poor quality construction. The BRT has not only caused traffic jams but incidents like fire at stations, buses and water leakages have occurred since its launch.