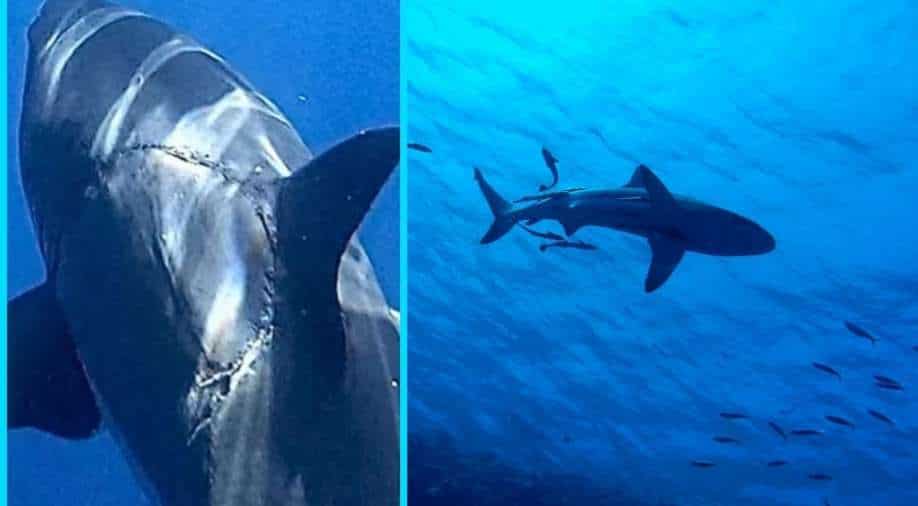 Photographer Jalil Najafov posted the video on his Instagram account for the first time in late December 2021. Photograph:( Others )

Photographer Jalil Najafov who spotted the great white female shark with a mysterious bite mark, told when and where he spotted the photo

A photo of a shark went viral on social media platforms after it was spotted with a giant and mysterious ring of teeth marks around her side. The bite mark on the great white female shark can be seen encompassing her entire chest.

Is it really a bite mark? The photo is wuite mysterious when one looks at it for the first time and it is intriguing the readers to know more about it.

Photographer Jalil Najafov, who posted the particular video on his Instagram account in late December 2021, told the story behind the photo. As per reports, Najafov is a shark conservationist, enthusiast and filmmaker.

As per a report by CNN, Najafov and some of his friends were exploring the coast of Mexico in August 2019 when they spotted a great white shark swimming close to their boat with a mysterious bite mark on its side.

"I was really surprised since I never saw something like this in my life. The bite mark was so huge on a huge shark," Najafov said as quoted by CNN Travel.

"I have been working with sharks and shark content for many years, I have a lot of experience in this niche. I know for sure when I see something rare, I have never seen such a huge shark scar," he added.

In his Instagram post, Najafov had shared some detailed pieces of information as he evaluated if this was a mating scar or act of aggression.

In his post, he mentioned the inputs given by a scientist Dr Tristan Guttridge, who said he would "rule out mating probably" due to position of the mark.

"I'd rule out mating probably due to position as the wound looks like it's healed a fair bit and although mating scars can be nasty they are more superficial than that," Guttridge was quoted as saying in the Instagram post.