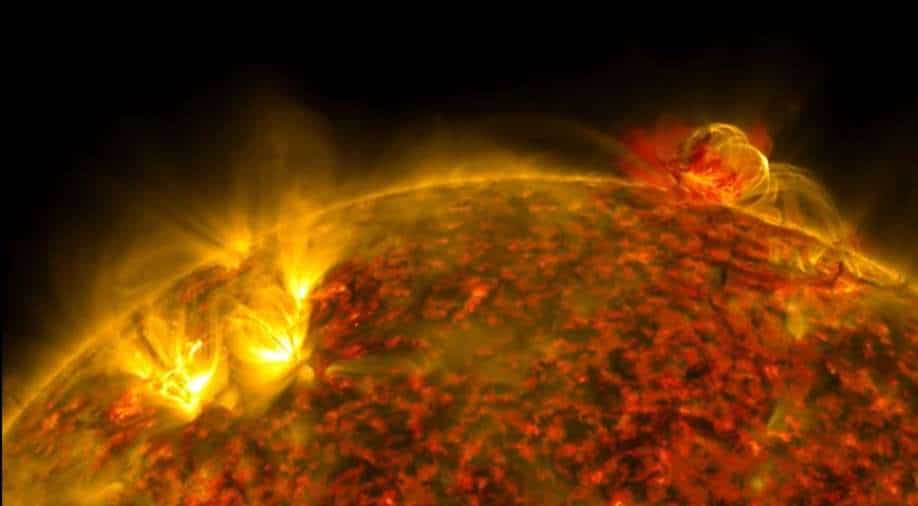 From late afternoon October 25 through mid-morning October 26, an active region on the left limb of the Sun flickered with a series of small flares and petal-like eruptions of solar material.

The Sun threw a spell in our way, brighter than a shimmering ghost and quicker than the flick of a black cat's tail, just in time for Halloween.

According to NASA, a large solar flare emerged from the Sun on October 28, sparking a "strong geomagnetic storm watch."

In a video, a flare was identified as an X-1 flare, the most powerful classification.

On October 28, the Sun produced a large solar flare that peaked around 11:35am EDT.

The incident was recorded on film by NASA's Solar Dynamics Observatory, which keeps a continual eye on the Sun.

"This imagery captured by NASA’s Solar Dynamics Observatory covers a busy few days of activity between Oct. 25-28 that ended with a significant solar flare. From late afternoon Oct. 25 through mid-morning October 26, an active region on the left limb of the Sun "flickered with a series of small flares and petal-like eruptions of solar material," wrote NASA Goddard.

"Meanwhile, the Sun was sporting more active regions at its lower center, directly facing Earth. On Oct. 28, the biggest of these released a significant flare, which peaked at 11:35 a.m. EDT. Solar flares are powerful bursts of radiation. Harmful radiation from a flare cannot pass through the Earth’s atmosphere to physically affect humans on the ground, however — when intense enough — they can disturb the atmosphere in the layer where GPS and communications signals travel," the caption for the video read.

The storm is being compared to the 1859 Carrington Event, when a geomagnetic storm disrupted telegraph operations for many days.

What are solar flares?

A solar flare is a rapid and intense explosion on the Sun’s surface which happens in the aftermath of massive amounts of energy which is stored in magnetic fields being released suddenly.

As the explosion happens, radiation is released into the universe, directly affecting the planets in our solar system. These radiations comprise of radio waves, x-rays, and gamma rays.

NASA claims that the energy released by this explosion is equivalent to millions of 100-megaton hydrogen bombs going off at the same time. Even then, it constitutes just one-tenth of the Sun’s total energy.

A flare's harmful radiation cannot penetrate through Earth's atmosphere to harm humans on the ground, but they can disrupt the atmosphere in the layer where GPS and communications signals flow if they are strong enough.