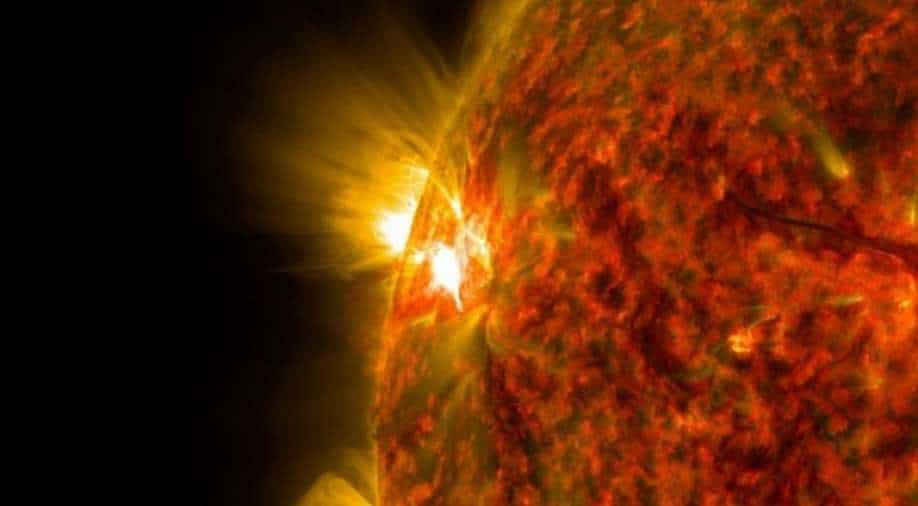 NASA claims that the energy released by this explosion is equivalent to millions of 100-megaton hydrogen going off at the same time. Even then, it constitutes just one-tenth of the Sun’s total energy.

The centre of our planetary system and the source of all energy on Earth, our gigantic Sun recently made its celestial presence felt with what is being called the biggest solar flare in four years. The flare in question erupted from a sunspot called “AR2838” on July 3, the Space Weather Prediction Centre said.

The explosion in AR2838 unleashed the strongest solar flare in four years, which is officially categorised as an X1.5-class explosion and marks the beginning of Sun’s new solar cycle.

The sunspot was situated near the Sun’s northwestern limb and is expected to shift to the far side of the Sun over the next few weeks. If the sunspot can stand its ground (pun intended), it may be visible to Earthlings again in the end of July.

The solar flare’s effects were felt on Earth including a shortwave radio blackout over the Atlantic Ocean. Solar flares are notorious for damaging equipment and disrupting electrical transmissions on Earth. And this flare was no different, for it produced a radio burst, a surge of electrical current, a deflection of local magnetic fields, and ionospheric disturbance.

Reports suggest that the flare led to the ionisation of the Earth’s atmosphere’s top-most layer, which in turn caused currents flowing in between 60-100 kilometres above Earth’s surface. As a result, the Earth’s polar magnetic field was altered.

What are solar flares?

A solar flare is a rapid and intense explosion on the Sun’s surface which happens in the aftermath of massive amounts of energy which is stored in magnetic fields being released suddenly.

As the explosion happens, radiation is released into the universe, directly affecting the planets in our solar system. These radiations comprise of radio waves, x-rays, and gamma rays.

NASA claims that the energy released by this explosion is equivalent to millions of 100-megaton hydrogen bombs going off at the same time. Even then, it constitutes just one-tenth of the Sun’s total energy.

Also read: Sun has awoken and sent solar storms Earth's way. What are the dangers?