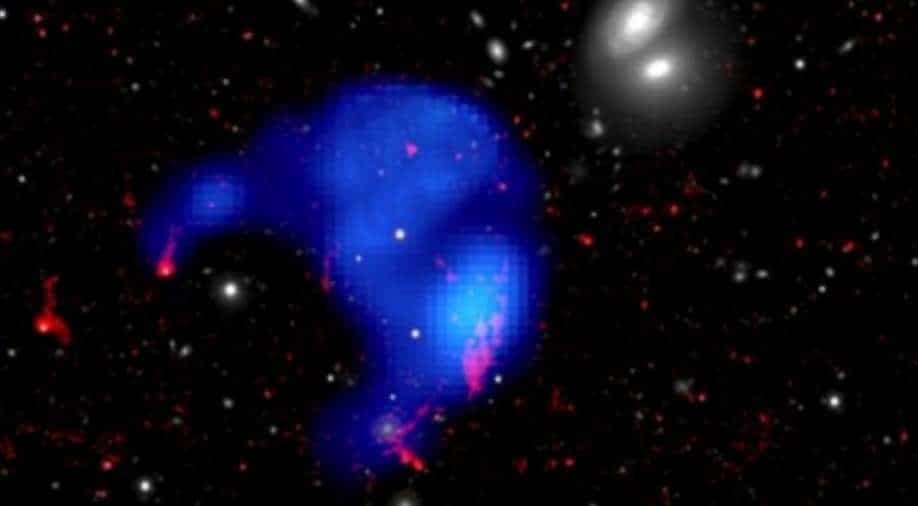 Scientists believe that the cloud may have been flushed out of a galaxy in the cluster. What surprises observers the most is that the cloud has remained intact over the long years instead of dissipating

Scientists have found evidence of a large cloud clustered in-between two galaxies in space. The cloud is made up of hot, glowing, and energised gases and has remained in its current form for hundreds of millions of years. But how did this happen?

Scientists believe that the cloud may have been flushed out of a galaxy in the cluster. What surprises observers the most is that the cloud has remained intact over the long years instead of dissipating.

This knowledge could assist scientists in understanding galaxy clusters and their characteristics better!

Physicist Ming Sun from the University of Alabama Huntsville (UAH) believes this is as exciting as it is surprising. Sun headed the team that found the giant cloud in the region known as “no-man’s land” for galaxies. “The cloud is not associated with any galaxy and is in a ‘no-galaxy's land”, Sun was quoted on the university website as saying.

The “orphan cloud” was discovered in Abell 1367, also known as the Leo Cluster. A1367 is home to 70 galaxies and is situated 300 million light years from Earth. The cloud was spotted using technology from the European Space Agency (ESA). X-ray Multi-Mirror Mission (XMM-Newton) is Europe’s flagship X-ray telescope.

According to Ming Sun, the cloud was found in a cluster of galaxies where thousands of galaxies are held together by hot gases with temperatures as hot as 100,000,000 degree Kelvin.

Using temperatures and velocity, the scientists concluded that the cloud in fact originated from a galaxy. It is unusual for the cloud to survive for thousands of millions of years without a galaxy to support. Scientists believe it is being held together by the magnetic field of the cloud.

This could help astronomers understand why some orphan clouds manage to stay afloat after being expelled from a galaxy.

Also read: Presence of clay on Mars points to the planet being habitable once: Study

The image may be found here