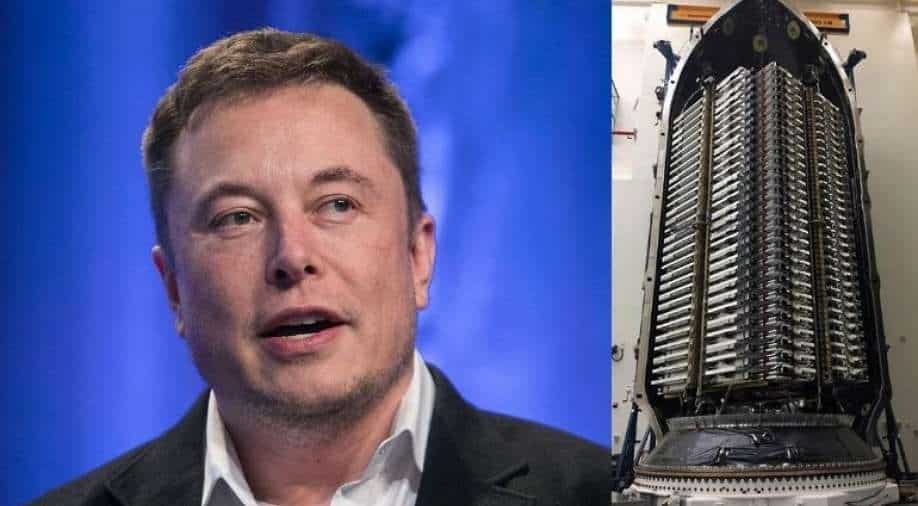 In this combination of images, SpaceX CEO Elon Musk can be seen along with Starlink satellites loaded into a Falcon fairing Photograph:( Agencies )

SpaceX founder Elon Musk has said that the company is focusing on cyber defence and overcoming signal jamming amid Russia's ongoing invasion of Ukraine.

"Some Starlink terminals near conflict areas were being jammed for several hours at a time," Musk said.

It comes after the company's broadband service was told by some governments to block Russian news sources.

"Starlink has been told by some governments (not Ukraine) to block Russian news sources. We will not do so unless at gunpoint," the tech titan tweeted.

Starlink was activated in Ukraine last week after Kyiv digital minister Mykhailo Fedorov urged Musk to provide the embattled country with stations days after it was invaded by neighboring Russia.

The service operates a constellation of more than 2,000 satellites that aim to provide internet access across the planet.

Web monitoring group NetBlocks has reported a series of significant disruptions to internet service in Ukraine since the Russian invasion began.

Musk asked users to "turn on Starlink only when needed and place antenna away as far away from people as possible" and "place light camouflage over the antenna to avoid visual detection."

He said that Starlink was the only non-Russian communications system still working in some parts of Ukraine in the wake of Russia's invasion.

Ukrainian President Volodymyr Zelensky said he had spoken to SpaceX Chief Executive Officer Elon Musk and announced the country would receive more of its Starlink satellite internet terminals next week.

"Talked to Elon Musk. I'm grateful to him for supporting Ukraine with words and deeds," Zelenskiy tweeted.

Talked to @elonmusk. I’m grateful to him for supporting Ukraine with words and deeds. Next week we will receive another batch of Starlink systems for destroyed cities. Discussed possible space projects 🚀. But I’ll talk about this after the war.

This week the European Union banned Russian state-funded RT and Sputnik from the 27-nation bloc, while US-based social media giants including Twitter and Facebook parent Meta have taken steps to block the spread of Russian state-linked news media.

Since its military invaded on February 24, Russia has pummeled Ukrainian cities, with officials reporting hundreds of civilians killed.

Russian authorities have repeatedly and falsely decried reports of Russian military setbacks or civilian deaths in Ukraine as “fake” news, as well as reports calling the offensive a war or an invasion. They have imposed a news blackout, with multiple media websites partially inaccessible, Twitter restricted and Facebook blocked.

State media outlets and government officials refer to Russia’s invasion of Ukraine as a “special military operation” and insist the Russian forces only target military facilities.