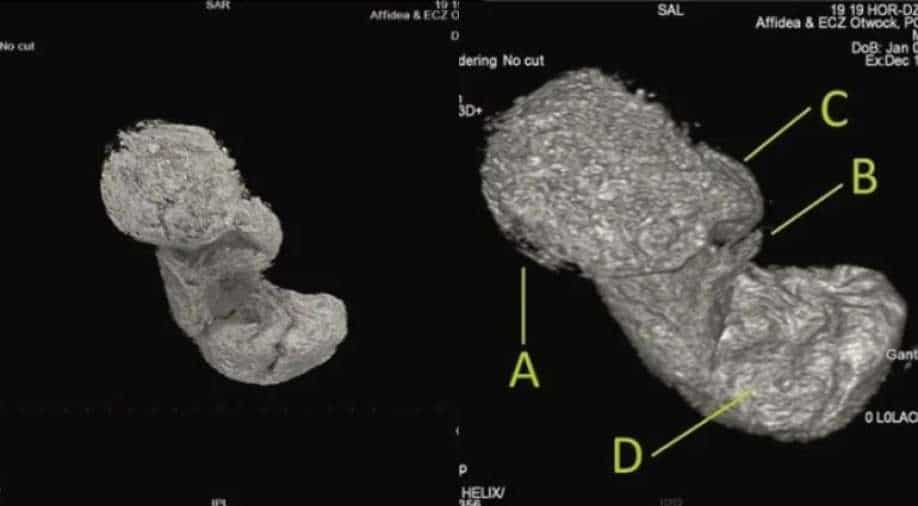 Computed tomography of the fetus in the mummy of the Mysterious Lady (Warsaw Mummy Project). Photograph:( Others )

The findings of study, under the Warsaw Mummy Project, have been published in the Journal of Archaeological Science

The 'pickled' fetus of an Egyptian mummy has baffled scientists who are researching the cause and process of its preservation.

The findings of study, under the Warsaw Mummy Project, have been published in the Journal of Archaeological Science.

The project aims to thoroughly examine human and animal mummies from ancient Egypt at the National Museum in Warsaw.

"The fetus remained in the untouched uterus and began to, let say, 'pickle'. It is not the most aesthetic comparison, but conveys the idea," the research team, led by bio-archaeologist Marzena Ożarek-Szilke of the University of Warsaw in Poland and archaeologist Wojciech Ejsmond of the Polish Academy of Sciences, explain in a blog post.

"Blood pH in corpses, including content of the uterus, falls significantly, becoming more acidic, concentrations of ammonia and formic acid increase with time. The placement and filling of the body with natron [a salt mixture collected from dry lake beds] significantly limited the access of air and oxygen. The end result is an almost hermetically sealed uterus containing the fetus."

As per researchers, "This process of bone demineralization in an acidic environment can be compared to an experiment with an egg."

"Picture putting an egg into a pot filled with an acid. The eggshell is dissolving, leaving only the inside of the egg (albumen and yolk) and the minerals from the eggshell dissolved in the acid."

"Maybe it had something to do with beliefs and rebirth in the afterlife," Ożarek-Szilke said.

"It is still difficult to draw any conclusions as we do not know if this is the only pregnant mummy. For now, it is definitely the only known pregnant Egyptian mummy."