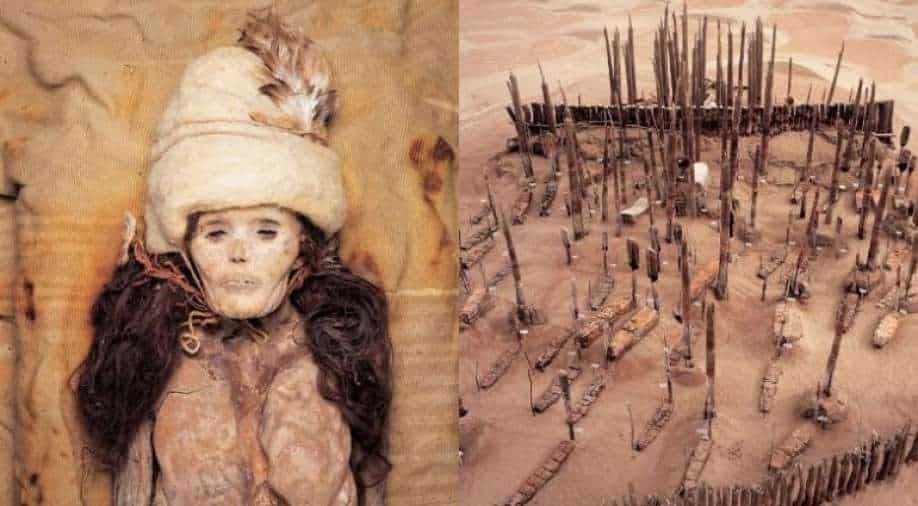 The study, published in the journal Nature, said the mummies were 4000 years old and the remains belonged to a local group called Ancient North Eurasians that descended from an ancient Ice Age Asian population

The DNA analysis of enigmatic mummies discovered in a Chinese desert has revealed their unexpected origins.

The study, published in the journal Nature, said the mummies were 4000 years old and the remains belonged to a local group called Ancient North Eurasians that descended from an ancient Ice Age Asian population.

Currently, Indigenous people in Siberia and the Americas have the highest known proportions of this group.

Traces of this hunter-gatherer population survive only fractionally in the genomes of today's populations.

According to Christina Warinner, an associate professor of anthropology at Harvard University, ''The mummies have long fascinated scientists and the public alike since their original discovery.''

''Beyond being extraordinarily preserved, they were found in a highly unusual context, and they exhibit diverse and far-flung cultural elements,'' she added.

The 13 mummies, found in Xinjiang's Tarim and Dzungarian Basin, were discovered in the 1990s.

''In contrast to their genetic isolation, however, they seem to have openly embraced new ideas and technologies from their herder and farmer neighbors, while also developing unique cultural elements shared by no other groups,'' she said.

Previous genetic samples discovered belonged to the Bronze Age as this was a region of incredible crossroads.

''There was vibrant mixing of North, South, East, and West going back as far back as 5,000 years," said Michael Frachetti, a professor of anthropology at Washington University in Saint Louis.''

The 1987 discovery of another mummy, the third century Lord of Sipan, is considered by experts one of the most significant archeological discoveries in the last few decades, as the main tomb was found intact and untouched by thieves.