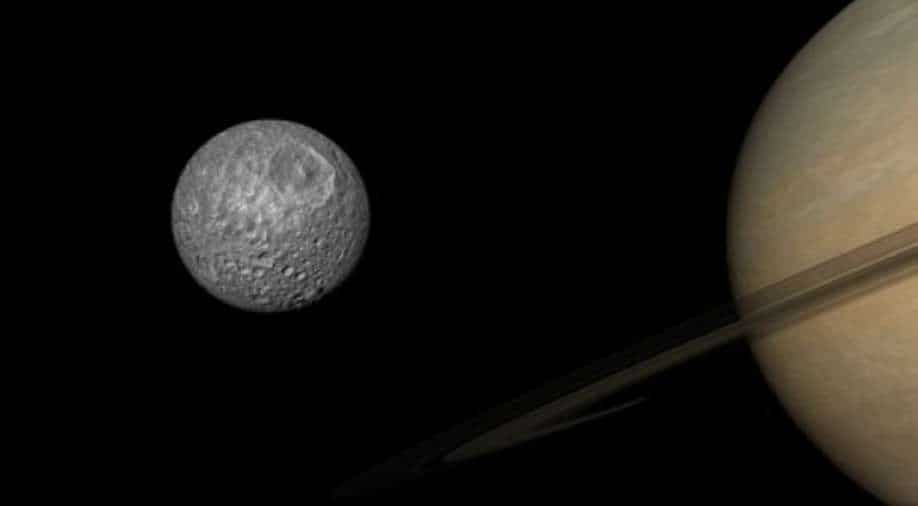 English astronomer William Herschel had discovered Mimas, the smallest and closest to Saturn of the ringed planet's moons

A new research has revealed that an ice moon on Saturn could be a 'stealth' ocean world hospitable to life.

The study, published in the journal Icarus, states that Saturn's innermost moon Mimas may contain a liquid internal ocean.

Saturn is now being recognised as the “moon king” of our solar system, with astronomers spotting 20 more of them orbiting the giant ringed planet, bringing its total count to 82, three more than Jupiter.

As per the study's lead author Alyssa Rhoden, a scientist at Southwest Research Institute in Boulder, "If Mimas has an ocean, it represents a new class of small, 'stealth' ocean worlds with surfaces that do not betray the ocean's existence."

English astronomer William Herschel had discovered Mimas, the smallest and closest to Saturn of the ringed planet's moons, in 1789. It resembles the Death Star from Star Wars.

"Because the surface of Mimas is heavily cratered, we thought it was just a frozen block of ice," said Rhoden, who is also the co-leader of NASA's Network for Ocean Worlds Research Coordination Network.

"IWOWs, such as Enceladus and Europa, tend to be fractured and show other signs of geologic activity. Turns out, Mimas' surface was tricking us, and our new understanding has greatly expanded the definition of a potentially habitable world in our solar system and beyond."

Only Jupiter, the fifth planet from the sun, is larger. Saturn formed with the other planets and the sun about 4.5 billion years ago.

"Evaluating Mimas' status as an ocean moon would benchmark models of its formation and evolution," Rhoden said.

"This would help us better understand Saturn's rings and mid-sized moons as well as the prevalence of potentially habitable ocean moons, particularly at Uranus. Mimas is a compelling target for continued investigation."