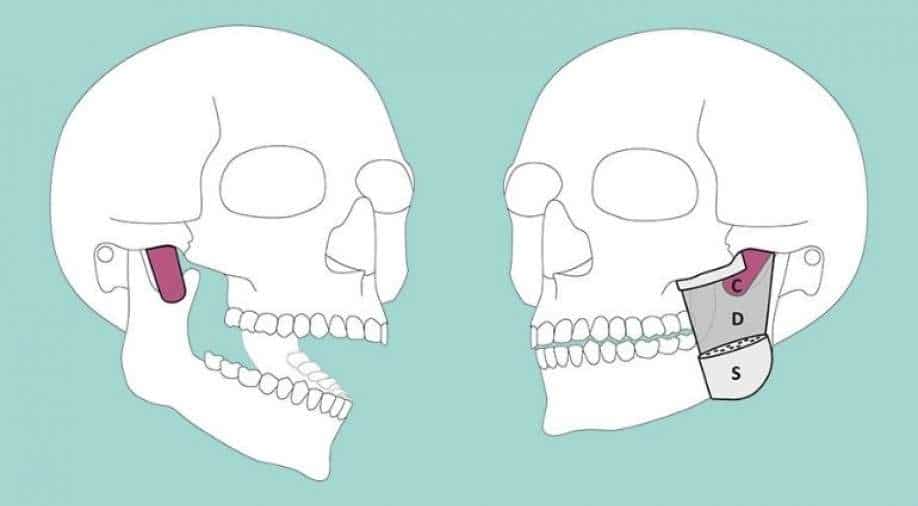 The newly discovered muscle layer (red) runs from the back of the cheekbone to the anterior muscular process of the lower jaw (Image credit: University of Basel) Photograph:( Others )

Attached to the muscular or 'coronoid' process of the lower jaw, it can pull the lower jaw backward, toward the ear

Scientists have identified a new muscle layer in the human jaw that helps it in stabilisation.

The discovery, made by researchers at the University of Basil, had previously been overlooked.

Attached to the muscular or “coronoid” process of the lower jaw, it can pull the lower jaw backward, toward the ear.

The masseter muscle is the most prominent of the jaw muscles. If you place your fingers on the back of your cheeks and press your teeth together, you’ll feel the muscle tighten. Anatomy textbooks generally describe the masseter as consisting of one superficial and one deep part.

According to lead author Szilvia Mezey from the Department of Biomedicine at the University of Basel, “This deep section of the masseter muscle is clearly distinguishable from the two other layers in terms of its course and function.”

The study, published in the scientific journal Annals of Anatomy, is based on a detailed analysis of stained tissue sections from deceased individuals who had donated their bodies to science.

“In view of these contradictory descriptions, we wanted to examine the structure of the masseter muscle again comprehensively,” says Jens Christoph Türp from the University Center for Dental Medicine Basel (UZB).

“Although it’s generally assumed that anatomical research in the last 100 years has left no stone unturned, our finding is a bit like zoologists discovering a new species of vertebrate.”