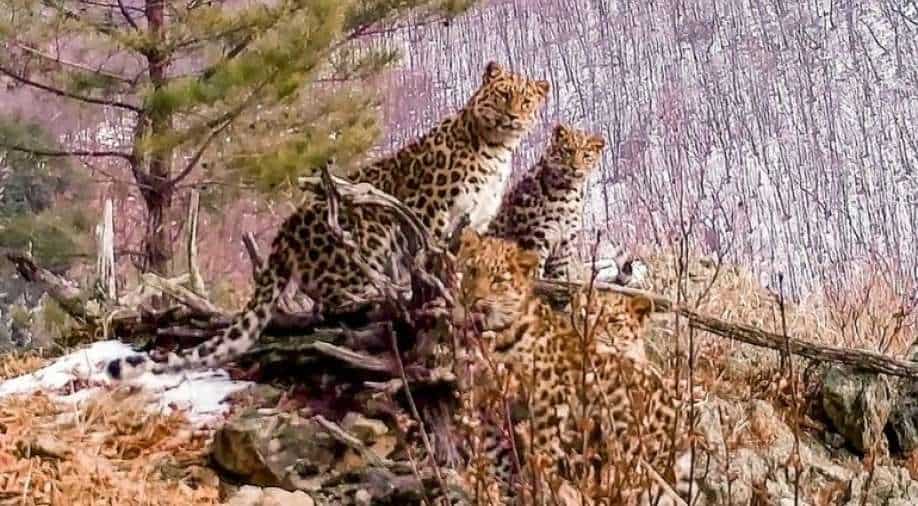 In the captured video, the young mother has been identified as Leo 117F who can be seen spotting a mystery animal and then moving towards it

A rare sighting of an Amur leopard family in the far-eastern region of Primorye has lifted up the spirits of Russian conservationists who believe this a proof that the country has been successful in boosting the population of endangered species.

The video footage was obtained by conservationists in a Russian national park in Primorye on the border with China, using a remote camera trap.

In the captured video, the young mother has been identified as Leo 117F who can be seen spotting a mystery animal and then moving towards it. The cubs observe their mother, without being afraid of the intruder in the family gathering.

This is the first time the Amur leopard has been caught on camera with her cubs. "We’ve discovered that she has been able to raise a family," Ivan Rakov, spokesman for the national park, said. "This is her first litter."

Considered to be the rarest of the world's big cats, Amur leopards are known to have their unique spot patterns. These leopards have decreased to 35 from 100 in Russia in the past 20 years.

Therefore, the spotting of the Amur leopard family has come as a big relief for the conservationalists in Russia.

"This is one more piece of evidence that measures taken by the Russian state to preserve the world’s rarest big cat are working," Rakov said.

Describing it as a "major success for Russia", Alexei Kostyrya, rare species projects coordinator at WWF Russia’s Amur branch, explained that this species has been essentially brought back "from the dead".