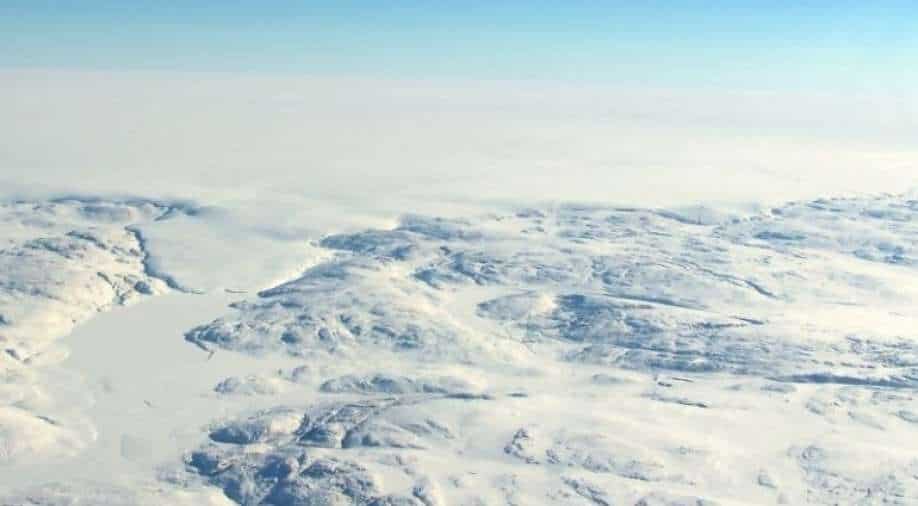 This image obtained November 14, 2018 courtesy of NASA shows the Hiawatha impact crater covered by the Greenland Ice Sheet and a tongue of ice that breaches the crater’s rim Photograph:( AFP )

In 2012, unusually high temperatures melted a vast part of Greenland’s ice sheet. Now its consequences are coming to light

Climate change, in tandem with pollution caused by humans, has increased the pace of melting of ice sheets in Greenland. But a new study points to much grim consequences of this consistent melting.

In 2012, unusually high temperatures melted a vast part of Greenland’s ice sheet. Now its consequences are coming to light. Turns out, the massive event left a dent in the sheet’s ability to absorb and store future meltwater.

The new study published in the journal Nature Communications saw authors from the US' University of Stanford using advanced modelling techniques. They also took into account data collected from NASA’s Operation IceBridge between 2012-17 to understand the rate of melting.

Authors believe this proves how a single event could have long-lasting effects on frozen places on planet Earth. In addition, they also claim that this could trickle down to cause major change in sea levels across the globe.

The Arctic region witnessed a rare and strong heatwave in summer 2012 turning frozen ice sheets in the region to lakes.

In usual circumstances, ice sheets can store meltwater through their upper regions (about 50 metres), preventing it from going into ocean. But the heatwave in 2012 had refrozen the melted water into a layer of ice, which in turn created slippery conditions speeding up the movement of the sheet which could eventually cause it to collapse into the ocean.

Researchers also noted that in some parts of the Greenland Ice Sheet, the melt layer had reduced the storage capacity to just five metres.