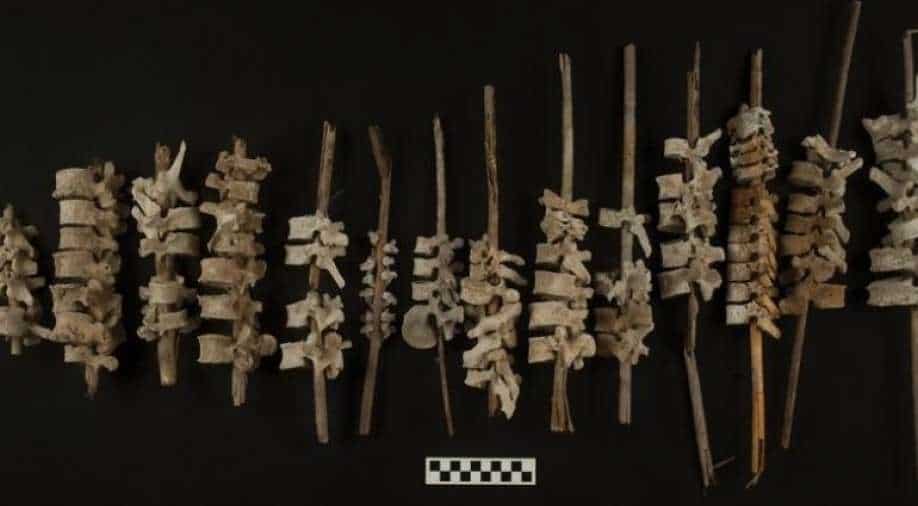 Archeologists have found 192 human spines on sticks in 500-year-old graves in Peru.

As per the findings in the new study, published in the archaeology journal Antiquity, post-mortem manipulation of human bodies is documented in many regions of the world, including South America.

Recent archaeological fieldwork in the Chincha Valley, Peru adds to this catalogue nearly 200 examples of the threading of human vertebrae onto reed posts.

In the study, researchers report on the distribution and composition of these ‘vertebrae-on-posts’, which are radiocarbon-dated to the Late Horizon (AD 1400–1532) and Colonial (AD 1532–1825) periods.

The authors argue that these modified remains represent a social process that reconstructed the dead in response to Colonial-period looting.

Jacob L. Bongers, lead author of the study, said this particular period was "turbulent" in the history of the Chincha Valley, as "epidemics and famines decimated local people."

"Looting of indigenous graves was widespread across the Chincha Valley in the colonial period. Looting was primarily intended to remove grave goods made of gold and silver and would have gone hand in hand with European efforts to eradicate indigenous religious practices and funerary customs," Bongers said in a news release.

"The fact that there's 192 of these and that they're widespread — we find these throughout the Chincha Valley — it means on one level that multiple groups of people coordinated and responded in a shared way, that this interesting practice was deemed the appropriate way of dealing with disturbed bodies of the dead," he added.

"When you look at all data we gathered, all of that supports the model that these were made after these tombs had been looted," Bongers said.

"Ritual plays important roles in social and religious life, yet can become contested, especially during periods of conquest in which new power relationships become established," Bongers said. "These finds reinforce how graves are one area where this conflict plays out."

"Mortuary practices arguably are what make us human — this is one of the key distinguishing features of our species. So, by documenting mortuary practices, we're learning diverse ways of how people showcased their humanity."