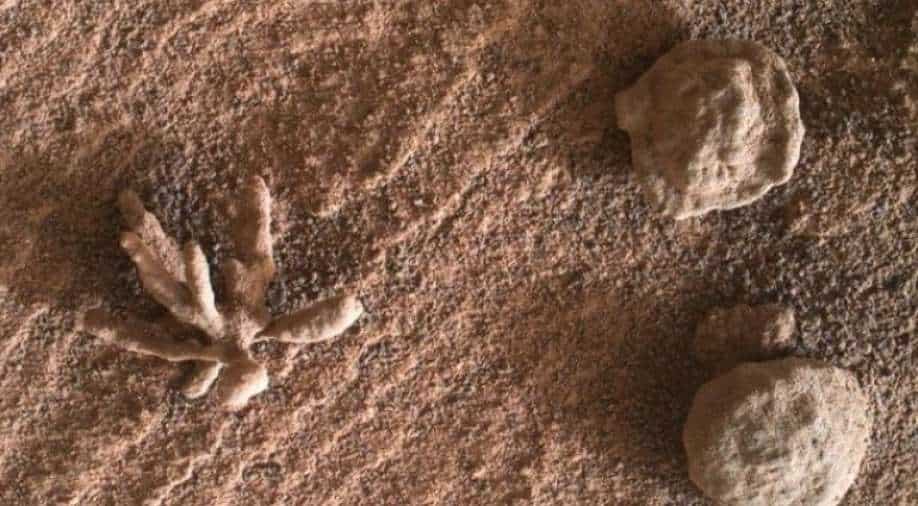 A tiny and delicate mineral 'flower' on Mars captured by NASA Photograph:( Twitter )

The object found by NASA is a mineral formation, with delicate structures formed by minerals precipitating from water

NASA’s Mars rover Curiosity has captured an image of a tiny and delicate mineral 'flower' on Mars.

“We’re finding things on Mars that are tantalizingly interesting, but we would really need more evidence to say we’ve identified life,” said Paul Mahaffy, who served as the principal investigator of the Sample Analysis at Mars (SAM) chemistry lab aboard Curiosity.

“So we’re looking at what else could have caused the carbon signature we’re seeing, if not life.”

The object found by NASA is a mineral formation, with delicate structures that formed by minerals precipitating from water.

“The hardest thing is letting go of Earth and letting go of that bias that we have and really trying to get into the fundamentals of the chemistry, physics, and environmental processes on Mars,” said Goddard astrobiologist Jennifer L. Eigenbrode, who participated in the study.

“We need to open our minds and think outside the box,” Eigenbrode said, “and that’s what this paper does.”

Unlike Earth, Mars doesn’t have a magnetic field to shield it from the high-energy particles whizzing around in space. That radiation can wreak havoc on human health, and it can seriously compromise the life support systems that Mars astronauts will depend on, as well.

Based on data from Curiosity’s Radiation Assessment Detector researchers are finding that using natural materials such as the rock and sediment on Mars could offer some protection from this ever-present space radiation.

The 1-tonne rover touched down inside an ancient impact basin in August 2012. It quickly discovered a region inside the Gale Crater landing site that was chemically and geologically suited for the same kind of rock-eating microbes commonly found on Earth.