NASA, SpaceX to launch spacecraft today and kick an asteroid off course. Are we in danger? 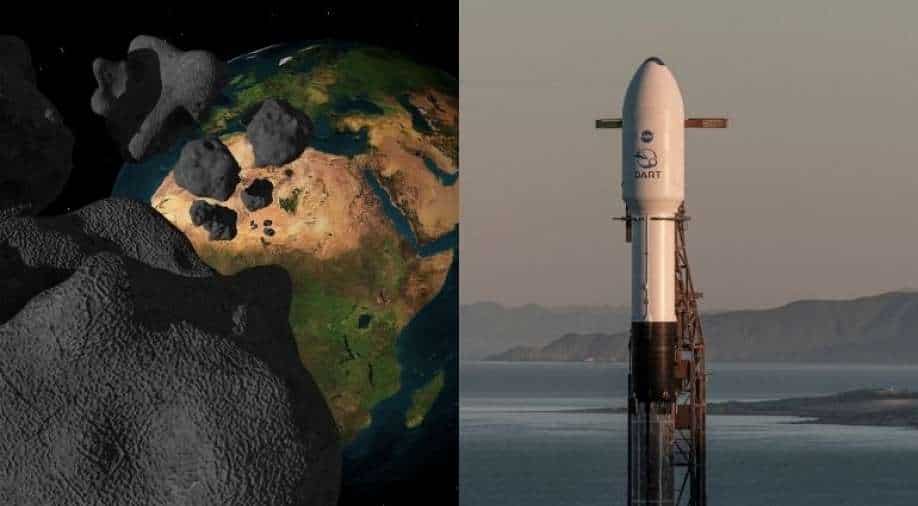 To put it into perspective, the DART probe, which is a box as big as a large fridge with solar panels the size of limousines on either side, will crash into Dimorphos at approximately 15,000 miles an hour. Photograph:( WION Web Team )

At present, there are 10,000 near-Earth asteroids larger than 460 feet, but none has a significant chance of hitting the Earth within a century

Do you think dinosaurs ever stood a chance against the asteroid that wiped off the mighty creatures? If they were sentient beings and could have protected themselves. Does humanity stand a chance when it comes to something like that...an asteroid so massive it can wipe out the entire planet?

The answer is yes, we actually might. Scientists at NASA are planning a mission to deliberately crash a spacecraft into an asteroid -- as a test run, in case a giant space rock is heading towards us to wipe out life on Earth one day.

Just to be clear, the asteroids in question pose no threat to our planet.

Also read | To avert Armageddon, NASA to collide spacecraft into asteroid to alter its orbit

All systems and weather are looking good for tonight’s Falcon 9 launch of @NASA’s DART into an asteroid-intercepting interplanetary trajectory → https://t.co/bJFjLCzWdK pic.twitter.com/BBrMndhpkQ

This mission will slightly alter Dimorphos' trajectory, a "moonlet" that is about 525 feet (160 meters) wide and circles a much larger asteroid known as Didymos (2,500 feet in diameter). The two, orbit the Sun together.

The impact will likely occur in the fall of 2022 when the binary asteroid system will be 6.8 million miles away (11 million kilometres), which is the nearest they will ever be to Earth.

"What we're trying to learn is how to deflect a threat," NASA's top scientist Thomas Zuburchen said of the $330 million project, the first of its kind.

While the asteroids in question pose no threat to Earth, nevertheless, they belong to a class of bodies known as Near-Earth Objects (NEO), asteroids and comets that approach within 30 million miles of our planet.

Specifically, NASA's Planetary Defense Coordination Office is more interested in space objects larger than 460 feet in size, which can destroy entire cities and regions with more energy than an average nuclear bomb.

At present, there are 10,000 near-Earth asteroids larger than 460 feet, but none has a significant chance of hitting the Earth within a century.

However, one major caveat: It is important to note that scientists believe there are still 15,000 more such objects just waiting to be found.

While planetary scientists can simulate miniature impacts in laboratories and use the results to generate sophisticated models about how to divert an asteroid, models are never as effective as real-world experiments.

Didymos-Dimorphos is considered an "ideal natural laboratory," since Earth-based telescopes can easily measure the brightness variation of the pair and calculate how long it takes the moonlet to orbit its big brother.

And since the current orbit period is known, the change in this period will reveal the impact's effect, which is scheduled between September 26 and October 1, 2022.

DART investigation team leader Andy Rivkin said the current orbital period is 11 hours 55 minutes, but the kick is expected to shave around 10 minutes off that time.

In addition, since these asteroids do not intersect our planet's orbit, they are considered to be safer to study.

Watch | A giant asteroid just whizzed past Earth, and no one had a clue!

To put it into perspective, the DART probe, which is a box as big as a large fridge with solar panels the size of limousines on either side, will crash into Dimorphos at approximately 15,000 miles an hour.

What else can be done to protect the Earth from space objects?

While the so-called "kinetic impactor" method isn't the only way to divert an asteroid, it is the only one that can be deployed today.

Another possibility includes flying a spacecraft nearby to produce a small gravitational force.

A third option is to explode a nuclear device close by, but not on the object, as in the movies Armageddon and Deep Impact. However, this would likely create even more hazardous objects.