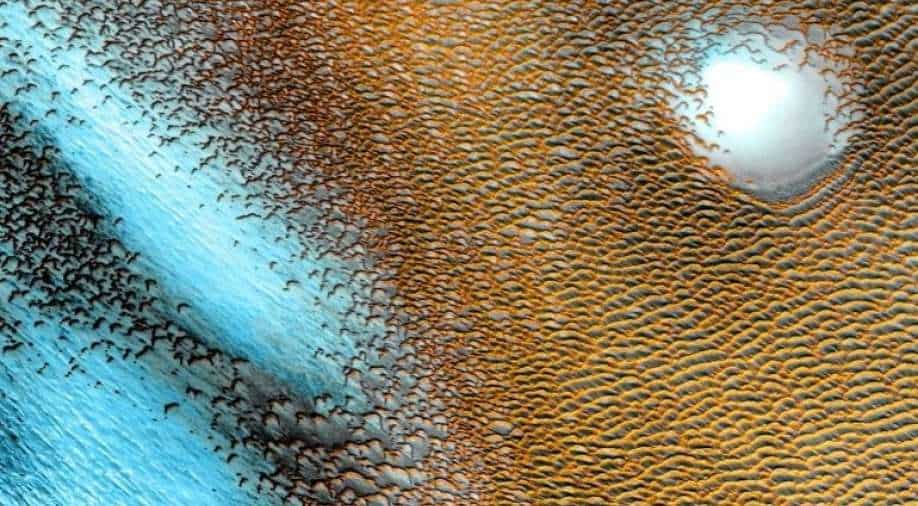 It is part of a special set of images marking the 20th anniversary of Odyssey, the longest-working Mars spacecraft in history

The Jet Propulsion Laboratory of NASA has released an image of a sea of dark dunes, sculpted by the wind into long lines, surrounds Mars' northern polar cap and covers an area as big as Texas.

In this false-color image, areas with cooler temperatures are recorded in bluer tints, while warmer features are depicted in yellows and oranges. Thus, the dark, sun-warmed dunes glow with a golden color. This image covers an area 19 miles (30 kilometres) wide.

This scene combines images taken during the period from December 2002 to November 2004 by the Thermal Emission Imaging System instrument on the Mars Odyssey orbiter. It is part of a special set of images marking the 20th anniversary of Odyssey, the longest-working Mars spacecraft in history. The pictured location on Mars is 80.3 degrees north latitude, 172.1 degrees east longitude.

NASA’s 2001 Mars Odyssey spacecraft launched 20 years ago on April 7, making it the oldest spacecraft still working at the Red Planet. The orbiter, which takes its name from Arthur C. Clarke’s classic sci-fi novel “2001: A Space Odyssey” (Clarke blessed its use before launch), was sent to map the composition of the Martian surface, providing a window to the past so scientists could piece together how the planet evolved.

But it’s done far more than that, uncovering troves of water ice, serving as a crucial communications link for other spacecraft, and helping to pave the way not just for safer landings but also future astronauts.