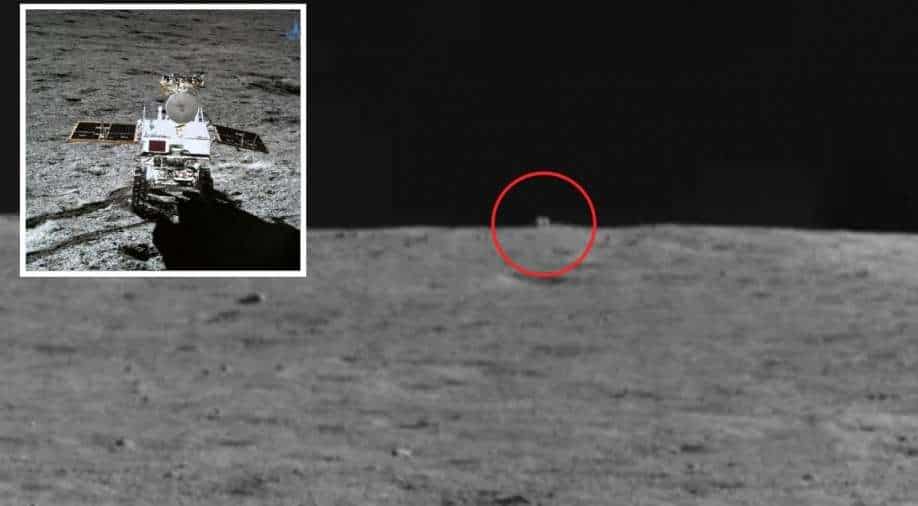 Yutu-2 is currently operational as the first lunar rover on the far side. Photograph:( Twitter )

The Chinese Yutu 2 rover has spotted a mysterious cube-shaped object on the far side of the moon - nearly 80m away from the rover in Von Kármán crater, as mentioned in the media reports.

Reports also added that the object has been referred to as a "mystery house" and in the next two to three lunar days, the rover will attempt to get closer and check it out.

SPACE.com reported, Yutu 2 spotted the object on the horizon to the north in November during the mission's 36th lunar day, according to a Yutu 2 diary published by Our Space. It is an outreach channel affiliated with the China National Space Administration (CNSA).

Such stories intrigue space enthusiasts; also conspiracy theorists as they come up with unproven ideas about the presence of aliens and UFOs. These images have gone viral on social media forums.

However, it is understood that the object spotted by Yutu 2 is not an obelisk or aliens as it can be boulders, which are usually formed by impacts of landings. But the images are something to check out as it's difficult to ascertain anything from the image.

For the unversed, Yutu 2 made the first-ever soft landing on the far side on the Moon in January 2019.

Ah. We have an update from Yutu-2 on the lunar far side, including an image of a cubic shape on the northern horizon ~80m away from the rover in Von Kármán crater. Referred to as "神秘小屋" ("mystery house"), the next 2-3 lunar days will be spent getting closer to check it out. pic.twitter.com/LWPZoWN05I

Yutu 2 was was launched on December 2018 and it entered lunar orbit on December 2018. It made the first soft landing on the Moon's far side on January 3 in 2019. Yutu-2 is currently operational as the first lunar rover on the far side.

The rover and Chang'e-4 lander are now into their 37th lunar day of activities and Yutu-2 could be approaching a total drive distance of 900 metres.