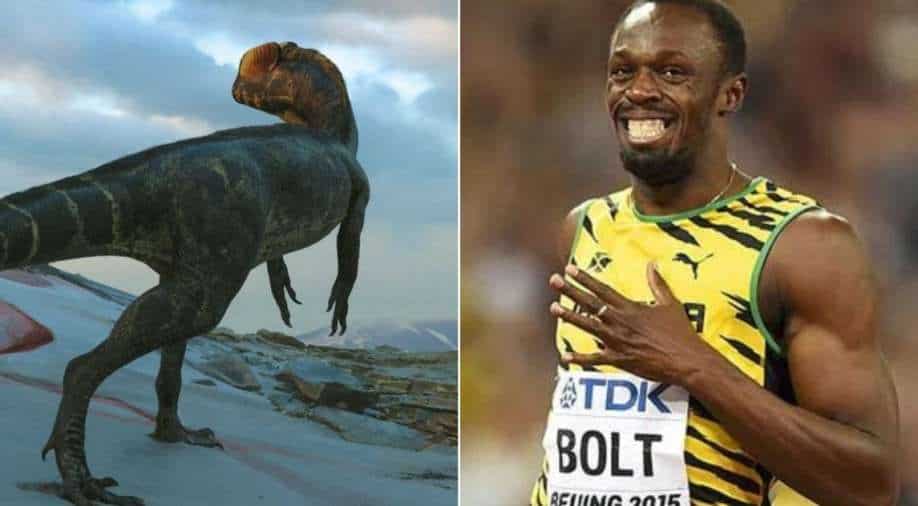 This is a representative photo of a dinosaur combined with Usain Bolt. Now the study has revealed that some species of theropods could reach speeds of 28mph. Photograph:( Others )

A group of researchers from the Universidad de La Rioja analysed a fossilised trackway found in Igea, Spain to know how fast theropods could run

The study of ancient life never fails to intrigue humans as we all are curious to know how our planet looked centuries ago, how organisms changed over time, other details about the flora and fauna of the prehistoric era.

Scientists have studied fossil data to reveal new details and researchers across the world continue to dig deeper to find more details about fossilised history.

Recently, a study shed light upon some species of theropod dinosaur, from the early Cretaceous, that could sprint at high speeds, possibly as fast as - Usain Bolt.

As per the study published in the journal Scientific Reports on Thursday (December 9), it has been revealed that some species of theropods could reach speeds of 28mph. Such speed would make them the fastest dinosaurs on record.

A group of researchers from the Universidad de La Rioja analysed a fossilised trackway found in Igea, Spain to know how fast theropods could run and what kind of movement they showed.

As per the study, the prints were left by two individuals from an unidentified species of theropods from the Igea site - named La Torre 6A-14 and 6B-1.

The researchers believe that La Torre 6A-14 prints were in size than the one who created 6B-1 and the dinosaur with larger pair of tracks was running between 14.5mph and 23.1mph. On the other hand, the Torre 6B-1 is believed to have speeds between 19.7mph and 27.7mph.

ALSO READ | In a first, fossils of a herd of 11 dinosaurs found in Italy

Interesting to note that the Jamaican sprinter Usain Bolt ran up to 27.3 miles per hour during a 100-meter race in 2011.

"Theropod behaviour and biodynamics are intriguing questions that palaeontology has been trying to resolve for a long time," a part of the abstract of the study read.

"The lack of extant groups with similar bipedalism has made it hard to answer some of the questions on the matter. Theoretical biomechanical models have shed some light on the question of how fast theropods could run," it further added.

The study of dinosaur tracks can help answer some of these questions due to the very nature of tracks as a product of the interaction of these animals with the environment.

Studies have revealed that theropods were two-legged dinosaurs, generally classed as a group of saurischians. They were ancestrally carnivorous, although later studies revealed that a number of theropod groups evolved to become herbivores, omnivores, piscivores and insectivores. Theropods are characterised by hollow bones and three-toed limbs.