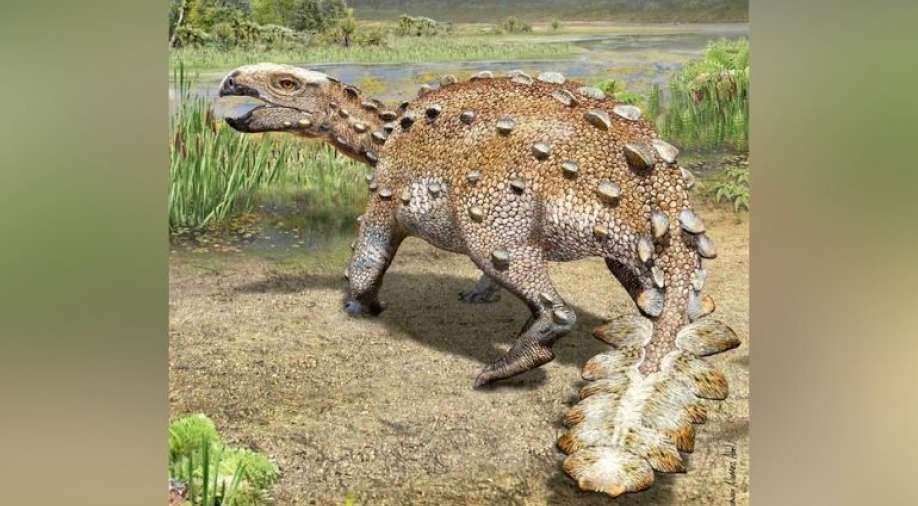 In this picture, an artistic representation of Stegouros elengassen can be seen. (Image credit: University of Chile) Photograph:( Others )

Known as Stegouros elengassen, the armoured dinosaur belongs to the late Cretaceous period

A unique ''weaponised'' dinosaur has been discovered by scientists in Chile. It has a battle ax for a tail.

Known as Stegouros elengassen, the armoured dinosaur belongs to the late Cretaceous period.

The study, published in Nature, offers new clues about the origin of these tank-like dinosaurs.

The bony tail, which is approximately 6.5 feet or 2 metres in size, is shaped like a club that was wielded by Aztec warriors. The highly unusual tail that has stumped researchers.

According to the study's main author, Sergio Soto Acuña, "The tail is extremely strange, as it is short for a dinosaur and the posterior half is encased in dermal bones (bones that grow in the skin) forming a unique (tail) weapon."

"That was the main surprise,” said Alexander Vargas, one of the paleontologists. “This structure is absolutely amazing."

"The tail was covered with seven pairs of osteoderms ... producing a weapon absolutely different from anything we know in any dinosaur," added the researcher during a presentation of the discovery at the University of Chile.

The remains of the dinosaur were discovered during excavations in 2018 at Cerro Guido, a site known to harbor numerous fossils.

Paleontologists have discovered 80 percent of the dinosaur's skeleton and estimate that the animal lived in the area 71 to 74.9 million years ago.

The animal could represent a hitherto unknown lineage of armored dinosaur never seen in the southern hemisphere but already identified in the northern part of the continent.