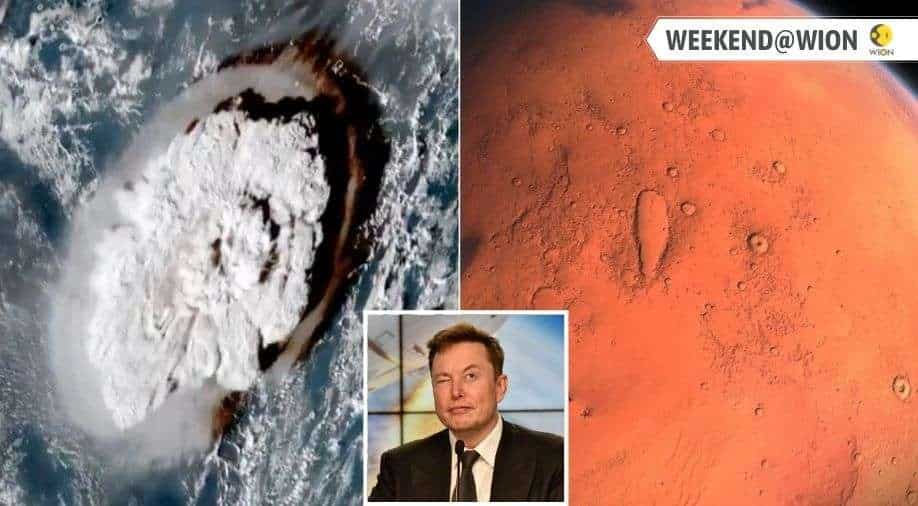 The volcanic eruption near Tonga could offer valuable clues about the formation of other planets like Mars and Venus. Photograph:( Reuters )

By studying the life cycle of eruption near Tonga, scientists have a "rare opportunity" to understand how formations may have been made on other planets like Mars and Venus

Tesla and SpaceX CEO Elon Musk is confident that humans will land on Mars by 2026. As he has been an advocate of hypothetical Mars colonisation, he might have persuaded people that human life outside Earth is possible.

The idea of setting up colonies on Mars has received interest from all corners as space scientists and experts are investigating all possibilities with several Mars missions.

In pursuit to pull off the extraordinary, the scientists and Musk's dream can get some help from the recent volcanic eruption near Tonga that unleashed explosive forces that undermined the power of the Hiroshima atomic bomb.

The undersea eruption of the Hunga-Tonga-Hunga-Ha'apai volcano was so powerful as it sent tsunami waves across the Pacific Ocean and was heard some 2,300km away in New Zealand. Thousands of homes were destroyed.

Locals and survivors had described how the devastating Pacific blast "messed up" their brains. In the aftermath, parts of the nation were covered in ashes, communication with other countries was cut because the undersea lines were damaged.

The Pacific nation has been reeling as other countries like Australia, New Zealand and India have come forward to help as even drinking water was scarce. But slowly and surely, the disaster-hit nation is pushing forward to reconstruct and reestablish.

Now, scientists are probing the eruption activities to learn and prepare humankind for such occurrences in future with advancements in technology.

Besides, that volcano could offer valuable clues about the formation of other planets like Mars and Venus as it is offering researchers a rare chance to study how water and lava interact.

NASA's Goddard Space Flight Center chief scientist James Garvin told Reuters that NASA experts had been studying the volcano for seven years before it erupted, and were now using forensic techniques to examine the remnants of the islands, Hunga Tonga and Hunga Ha'apai.

"We took that volume of mass ejected and the energetics to explosively fragment it, and calculated - using fairly classical techniques - how much energy that would take to break rock.... to break it up into little bits and throw it as ash and steam up," Garvin said.

"We did that calculation and we got numbers that range from something equivalent to the blast of a small asteroid that would hit the earth - about 10 metric, megatons of TNT or equivalent - to things even bigger," he said.

Garvin said that by studying the life cycle of the Tonga volcano, scientists have a "rare opportunity" to understand how formations may have been made on other planets like Mars and Venus.