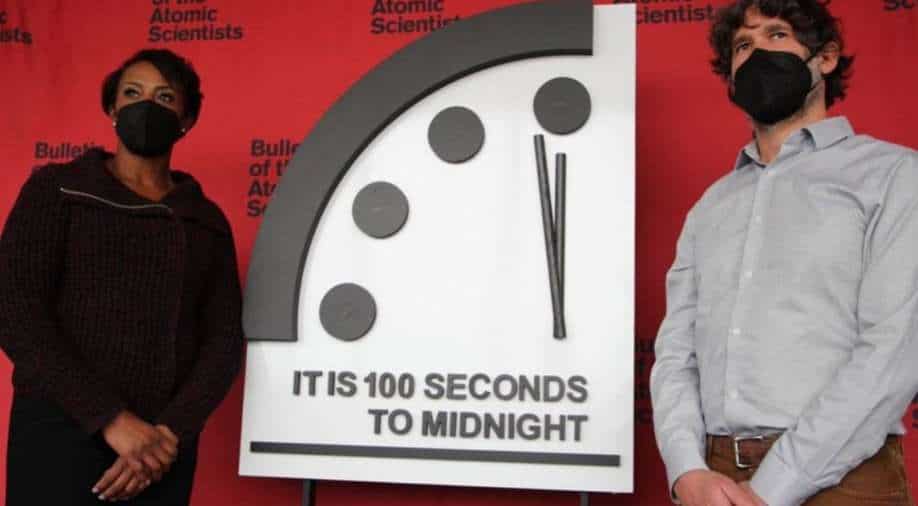 The Doomsday Clock is set every year by the Bulletin's Science and Security Board. Photograph:( Twitter )

The simple meaning of doomsday is the last day of the world's existence, but what is the Doomsday Clock?

The Doomsday Clock was founded in 1945 by Albert Einstein and University of Chicago scientists who helped develop the first atomic weapons in the Manhattan Project.

It was created by the Bulletin of the Atomic Scientists, using the imagery of apocalypse (midnight) and the contemporary idiom of a nuclear explosion (countdown to zero) to convey threats to humanity and the planet.

In the latest development, the Doomsday Clock, which basically tells the danger of human extinction, was set at 100 seconds to midnight according to a panel of experts.

Besides measuring existential threats, the clock also highlights some scientific topics such as climate change, according to the Bulletin of Atomic Scientists.

Sharon Squassoni, who is a George Washington University professor said, "The Doomsday Clock is holding steady at 100 seconds to midnight. But steady is not good news."

Squassoni is the co-chair of the Bulletin's science and security board that decides the clock's hand movements each year.

"In fact, it reflects the judgment of the board that we are stuck in a perilous moment, one that brings neither stability nor security." she added.

More about the Doomsday Clock

The Doomsday Clock is set every year by the Bulletin's Science and Security Board in consultation with its Board of Sponsors, which includes 11 Nobel laureates.

Rachel Bronson, Bulletin president and CEO, hopes it never will reach midnight. "When the clock is at midnight, that means there's been some sort of nuclear exchange or catastrophic climate change that's wiped out humanity," she said.

"So we never really want to get there and we won't know it when we do," she added.