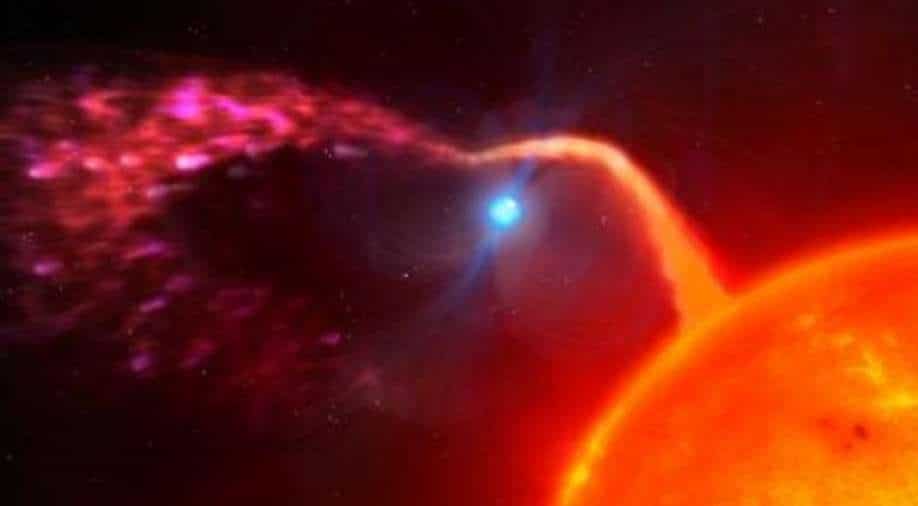 A dead star has officially smashed the record for the fastest known spin rate of a white dwarf.

The research, published in the Monthly Notices of the Royal Astronomical Society: Letters, shows that the star's speed has broken the previous record by 29 seconds.

Plasma is getting flung out at 3000 km/second from the star which resembles AE Aquarii.

According to astrophysicist Ingrid Pelisoli of the University of Warwick in the UK, ''the star will have completed several rotations in the short amount of time that people take to read about it, it is really incredible.''

''The rotation is so fast that the white dwarf must have an above average mass just to stay together and not be torn apart.''

''It is pulling material from its companion star due to its gravitational effect, but as that gets closer to the white dwarf the magnetic field starts to dominate. This type of gas is highly conducting and picks up a lot of speed from this process, which propels it away from the star and out into space,'' he added.

In their death throes, roughly 97 per cent of all stars become a smoldering stellar zombie called a white dwarf, one of the densest objects in the cosmos.

Only two other types of objects, black holes and neutron stars, are more compact than white dwarfs.

Stars with up to eight times the mass of our sun are thought to be destined to end up as a white dwarf.

Such stars eventually burn up all of the hydrogen they use as fuel through nuclear fusion. At this point, gravity causes them to collapse and blow off their outer layers in a 'red giant' stage, eventually leaving a dense core that is a white dwarf.

In appprocimately 5 billion years, our sun is expected to become a red giant and later a white dwarf.