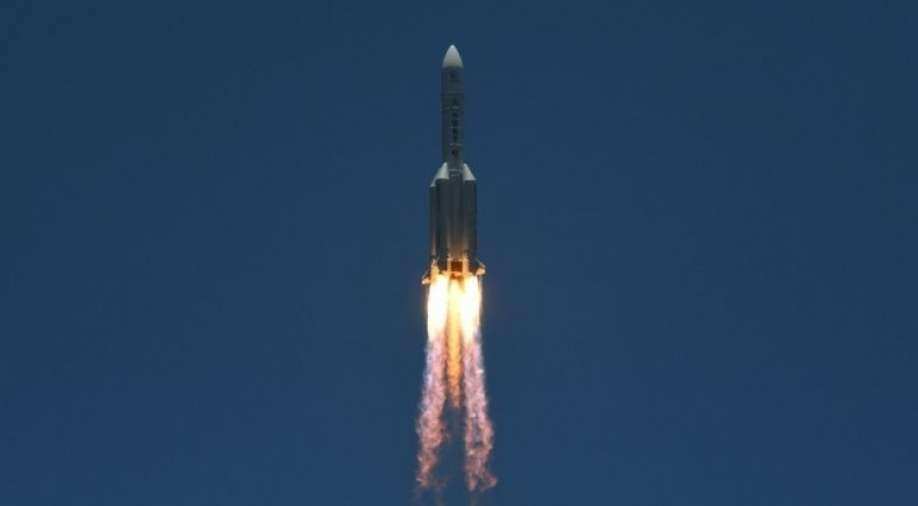 A Long March-5 rocket, carrying an orbiter, lander and rover as part of the Tianwen-1 mission to Mars, lifts off from the Wenchang Space Launch Centre in southern China's Hainan Province Photograph:( AFP )

The robotic probe initiated and completed a 15-minute burn of its thrusters, the China National Space Administration said in a statement, slowing the spacecraft to a speed at which it could be captured by the pull of Mars' gravity

China's Tianwen-1 probe entered the orbit of the planet Mars on Wednesday, after a nearly seven-month voyage from Earth, its space agency said, in the country's first independent mission to the red planet.

The robotic probe initiated and completed a 15-minute burn of its thrusters, the China National Space Administration said in a statement, slowing the spacecraft to a speed at which it could be captured by the pull of Mars' gravity.

The probe has already sent back its first image of Mars, a black-and-white photo that showed geological features including the Schiaparelli crater and the Valles Marineris, a vast stretch of canyons on the Martian surface.

According to Chi Wang, head of the National Space Science Center at the Chinese Academy of Sciences, "Scientifically, Tianwen-1 is the most comprehensive mission to investigate the Martian morphology, geology, mineralogy, space environment and soil and water-ice distribution.''

In about three months, the Tianwen-1 will attempt to send a landing capsule carrying a 240-kilogramme rover in a rapid seven-minute descent onto a massive plain in the northern hemisphere of Mars known as Utopia Planitia.

If the landing is successful, the solar-powered rover will explore the Martian surface for 90 days, studying its soil and seeking signs of ancient life, including any sub-surface water and ice using ground-penetrating radar.

Tianwen-1, or "Questions to Heaven", the name of a Chinese poem written two millennia ago, is China's first independent mission to the planet after a probe co-launched with Russia failed to leave the Earth's orbit in 2011.

The probe is one of three reaching Mars this month. The Hope spacecraft launched by the United Arab Emirates successfully entered the planet's orbit on Tuesday. Hope will not make a landing but will orbit Mars gathering data on its weather and atmosphere.

In the United States' most ambitious Mars mission, the 1-tonne Perseverance probe is expected to arrive on February 18.

It is on a mission to look for signs of ancient microbial life and will attempt to fly a 1.8-kilogram helicopter-drone on another planet for the first time.