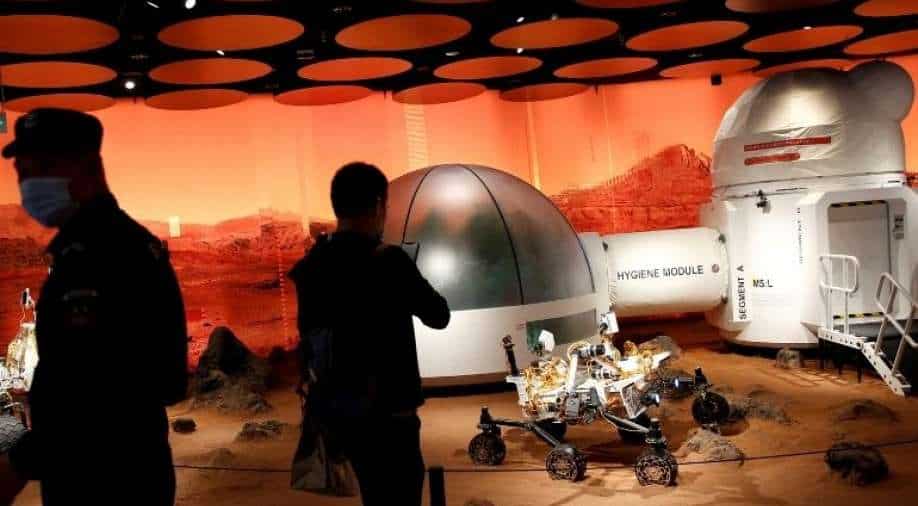 People inspect models of a Mars base and a rover displayed inside the SKP-S shopping mall in Beijing, China Photograph:( Reuters )

China's National Space Science Center has announced that the country has developed a prototype miniature helicopter for surveillance work on future Mars missions.

The prototype resembles NASA's robotic helicopter Ingenuity in appearance. The US space agency had used it for its Perseverance mission this year.

Like Ingenuity, the Chinese prototype sports two rotor blades, a sensor-and-camera base and four thin legs. But there is no solar panel at the top like Ingenuity.

China is planning its first crewed mission to Mars in 2033 and the helicopter could be used as a tool for a follow-up exploration of the Red planet.

China's heavily promoted space programme has already seen the nation land a rover on Mars and send probes to the moon. It is one of the most prestigious of all prizes in the competition for dominion of space.

The United States and Russia are the only other countries to have reached Mars, and only the former has operated a rover on the surface.

Several US, Russian and European attempts to land rovers on Mars have failed in the past, most recently in 2016 with the crash-landing of the Schiaparelli joint Russian-European spacecraft.