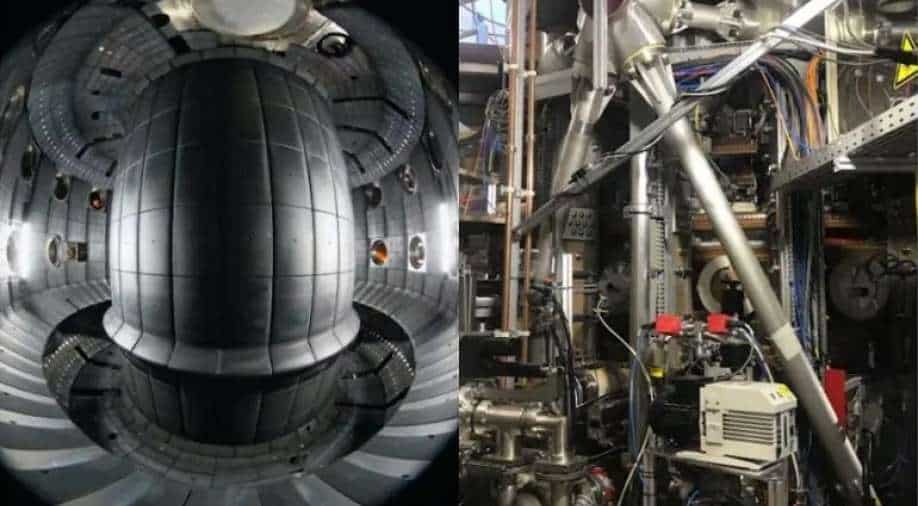 Photos of the Variable Configuration Tokamak (TCV) at EPFL seen from outside and a 3D model of TCV with vessel and control coils (Image credit: SPC/EPFL/DeepMind). Photograph:( Others )

Unlike the burning of fossil fuels or the fission process of existing nuclear power plants, fusion offers the prospect of abundant energy without pollution, radioactive waste, or greenhouse gases

Nuclear fusion comes from the fusing of two atoms at very high temperatures, which then release energy.

In the study, published in Nature, scientists have recreated these extreme conditions is by using a tokamak, a doughnut-shaped vacuum surrounded by magnetic coils, that is used to contain a plasma of hydrogen that is hotter than the core of the Sun.

However, the plasmas in these machines are inherently unstable, making sustaining the process required for nuclear fusion a complex challenge.

For example, a control system needs to coordinate the tokamak's many magnetic coils and adjust the voltage on them thousands of times per second to ensure the plasma never touches the walls of the vessel, which would result in heat loss and possibly damage.

To help solve this problem and as part of DeepMind’s mission to advance science, researchers collaborated with the Swiss Plasma Centre at EPFL to develop the first deep reinforcement learning (RL) system to autonomously discover how to control these coils and successfully contain the plasma in a tokamak, opening new avenues to advance nuclear fusion research.

Using a learning architecture that combines deep RL and a simulated environment, they produced controllers that can both keep the plasma steady and be used to accurately sculpt it into different shapes.

This “plasma sculpting” shows the RL system has successfully controlled the superheated matter and - importantly - allows scientists to investigate how the plasma reacts under different conditions, improving our understanding of fusion reactors.

"This AI is, in my opinion, the only way forward," said physicist Gianluca Sarri from Queen's University Belfast.

"There are so many variables, and a small change in one of them can cause a big change in the final output. If you try to do it manually, it's a very lengthy process."

Scientists have been working for decades to try to develop fusion energy as a viable power source.

Unlike the burning of fossil fuels or the fission process of existing nuclear power plants, fusion offers the prospect of abundant energy without pollution, radioactive waste, or greenhouse gases.