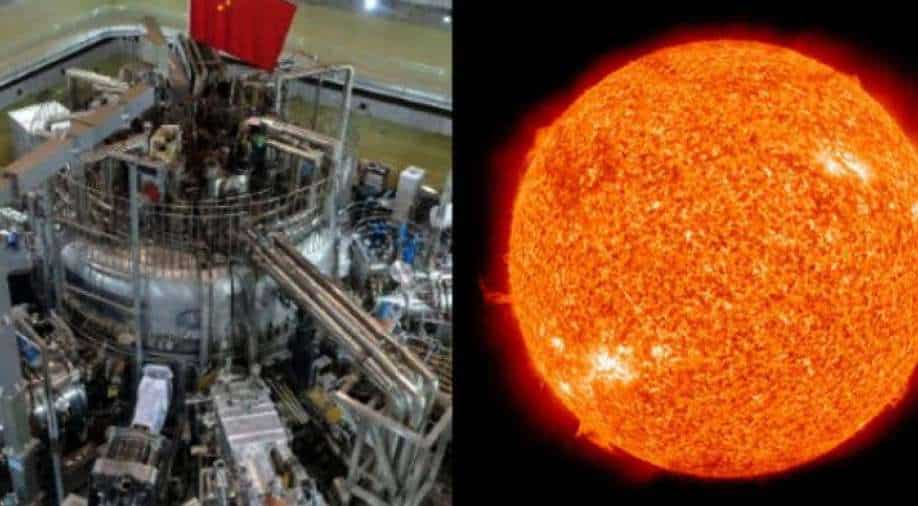 The Experimental Advanced Superconducting Tokamak (EAST), a nuclear fusion reactor and a respresentativa image of the "artificial sun" Photograph:( Agencies )

China has conducted a nuclear fusion experiment towards the advancement of its ''artificial sun.''

The experiment aims at making the artificial sun or the auxiliary heating system ''hotter'' and more ''durable.''

China has already spent around 6 billion yuan ($893 million) on a large doughnut-shaped installation known as a tokamak, which uses extremely high temperatures to boil hydrogen isotopes into a plasma, fusing them together and releasing energy.

If that energy can be utilised, it will require only tiny amounts of fuel and create virtually no radioactive waste.

“Five years from now, we will start to build our fusion reactor, which will need another 10 years of construction. After that is built we will construct the power generator and start generating power by around 2040,” said Song Yuntao, deputy director of the Institute of Plasma Physics at the Hefei Institute of Physical Science.

The process of nuclear fusion is replicated in the EAST heating system that became operational in 2006.

It broke a record in June this year when it reached a temperature that is ten times hotter than the sun. It had reached a peak temperature of 160 million degrees Celsius.

China is preparing to restart its stalled domestic nuclear reactor program after a three-year moratorium on new approvals, but at a state laboratory in the city of Hefei, in China’s Anhui province, scientists are looking beyond crude atom-splitting in order to pursue nuclear fusion, where power is generated by combining nuclei together, an endeavor likened by skeptics to “putting the sun in a box”.

China has been researching fusion since 1958, but at the current stage, it is still more about international cooperation than competition, Song said. The country is a member of the 35-nation ITER project, a 10-billion euro ($11.29 billion) fusion project under construction in France.

China is responsible for manufacturing 9 percent of ITER’s components, and is playing a major role in core technologies like magnetic containment, as well as the production of components that can withstand temperatures of over 100 million degrees Celsius (180 million degrees Fahrenheit).

ITER is scheduled to generate first plasma by 2025. A demonstration reactor will then be built, with the aim of creating 500 megawatts of power from just 50 megawatts of input, a tenfold return on energy.