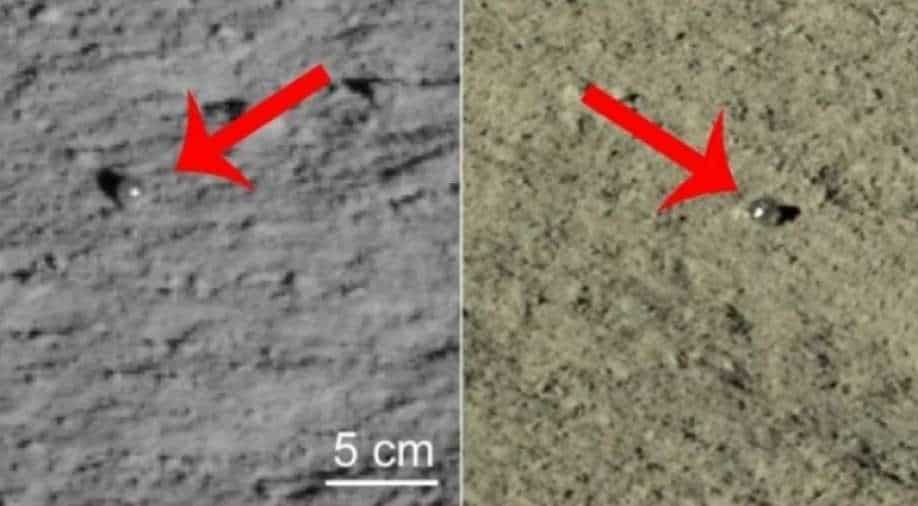 An image provided by Our Space, a science website affiliated with China National Space Administration, and, according to the website, was captured by Chinese rover Yutu-2 on the far side of the moon, shows glass spheres Photograph:( Twitter )

Chinese rover Yutu-2 has discovered mysterious glass spheres on the far side of the moon. The paper detailing the discovery has been published in Science Bulletin.

"Collectively, the peculiar morphology, geometry, and local context of the glass globules are consistent with being anorthositic impact glasses," the researchers write in their paper.

"As the first discovery of macroscopic and translucent glass globules on the Moon, this study predicts that such globules should be abundant across the lunar highland, providing promising sampling targets to reveal the early impact history of the Moon," they write.

It comes after sighted a cube-like object on the horizon about 80 metres (87 yards) from its location that fanned speculation over what it could be and inspired a host of memes by Chinese internet users.

The solar-powered Yutu, or "Jade Rabbit" in Chinese, will cover the distance of 80 metres in two to three lunar days, according to Our Space, or two to three Earth months.

The robotic rover has been operating in the Von Karman Crater in the South Pole-Aitken Basin since its deployment in January 2019.

The mission was a historic first, with no other nation having landed on the far side of the moon until then.

With the moon tidally locked to Earth - rotating at the same speed as it orbits our planet - most of its "dark side" is never visible to those on Earth.