Early Earth may have been donut-shaped: study 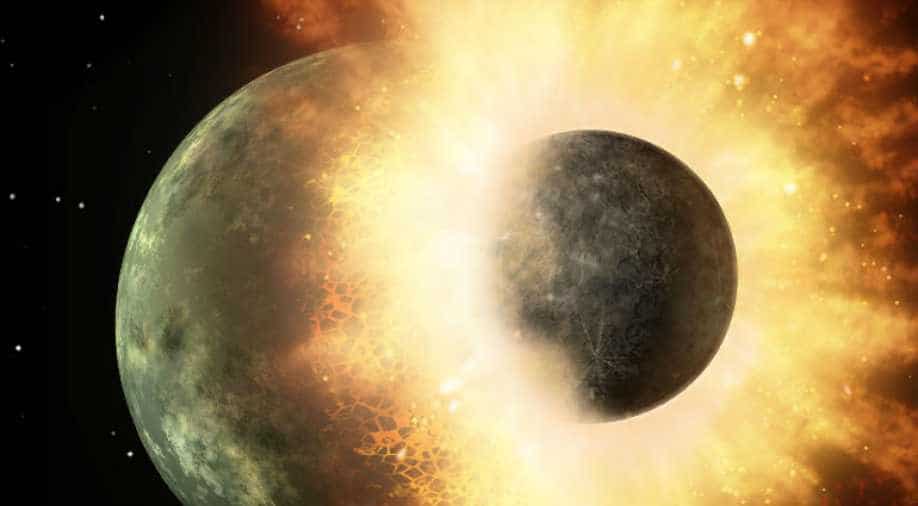 Researchers modeled what happens when the Earth-sized rocky planets collide with other large objects with high energy and momentum Photograph:( Others )

Earth may once have been a spinning, donut-shaped mass of hot, vapourised rock. ||Researchers named the spinning planetary object 'Synestia'

Our Earth may once have been a spinning, donut-shaped mass of hot, vapourised rock - called "synestia" - according to scientists who proposed the new type of planetary object.

Synestia is a spinning planetary object that forms as planet-sized objects smash into each other.

At one point early in its history, Earth was likely a synestia, said Sarah Stewart, scientist at the University of California Davis in the US.

Current theories of planet formation hold that rocky planets such as Earth, Mars and Venus formed early in the solar system when smaller objects smashed into each other. These collisions were so violent that the resulting bodies melted and partially vapourised, eventually cooling and solidifying to the nearly spherical planets we know today.

In the new study, researchers modeled what happens when the Earth-sized rocky planets collide with other large objects with high energy and momentum.

"We looked at the statistics of giant impacts, and we found that they can form a completely new structure," Stewart said.

Researchers found that over a range of high temperatures and momenta, planet-sized bodies could form a new, much larger structure, an indented disk rather like a red blood cell or a donut with the center filled in. The object is mostly vaporised rock, with no solid or liquid surface.

They have dubbed the new object a "synestia," from "syn" - meaning "together" - and "Estia," the Greek goddess of architecture and structures.

The key to synestia formation is that some of the structure's material goes into orbit.

In a spinning, solid sphere, every point from the core to the surface is rotating at the same rate. However, in a giant impact, the material of the planet can become molten or gaseous and expands in volume.

If it gets big enough and is moving fast enough, parts of the object pass the velocity needed to keep a satellite in orbit, and that is when it forms a huge, disc-shaped synestia, according to the study. Most planets likely experience collisions that could form a synestia at some point during their formation, Stewart said.

For an object like Earth, the synestia would not last very long perhaps a hundred years before it lost enough heat to condense back into a solid object. However, synestia formed from larger or hotter objects such as gas giant planets or stars could potentially last much longer, she said.

The Moon is remarkably like Earth in composition, and most current theories about how the moon formed involve a giant impact that threw material into orbit. However, such an impact could have instead formed a synestia from which the Earth and Moon both condensed, Stewart said.

No one has yet observed a synestia directly, but they might be found in other solar systems once astronomers start looking for them alongside rocky planets and gas giants, she said.

ISRO’s LVM3 rocket gains more lifting power; here’s how much it can carry

The Google Paradox: Why India's $162mn fine on search giant is flawed by misplaced priorities