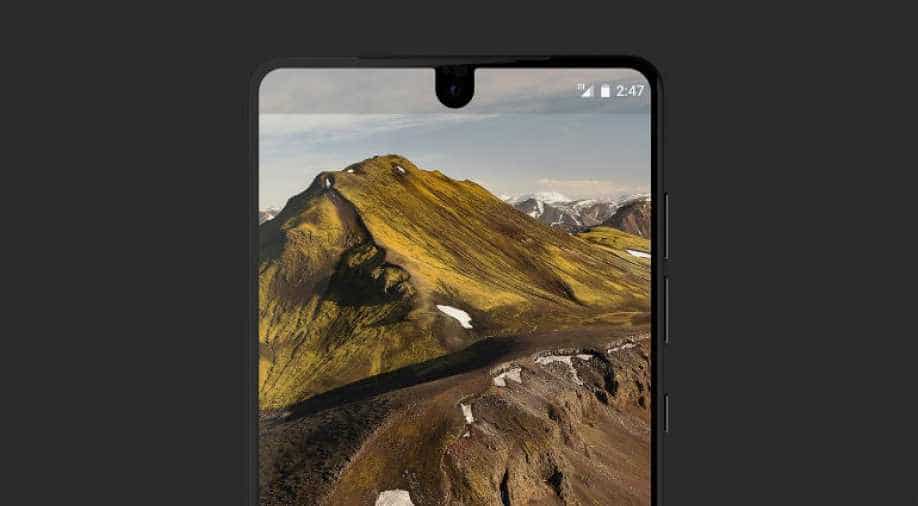 The front camera blends into what the company calls a Full Display Photograph:( Others )

Andy Rubin, the co-founder?of Android, launched a new company to sell a high-end smartphone and a home assistant device. ||The Essential Phone features an edge-to-edge screen, a titanium-ceramic case and dual cameras. ||The Home device will let the user choose between Google Assistant, Alexa and Siri.

Andy Rubin, the co-creator of the Android mobile phone operating system, has launched a new company called Essential Products to sell a high-end smartphone and a home assistant device.

Palo Alto-based Essential said the new Essential Phone features an edge-to-edge screen, a titanium-and-ceramic case and dual cameras. The phone sells for $699 and will run the Android operating system. The price pits it against high-end smartphones including Apple's iPhone and Samsung's Galaxy S8.

Essential also launched a household assistant called Home that looks like an angled hockey puck with a screen. The device will compete against Amazon's Echo and Alphabet's Google Home speaker, which are powered by the Alexa and the Google Assistant voice services respectively.

Essential confirmed the Home device will let the user choose between Alexa, Google Assistant or Siri. It was not immediately clear how Siri would be available on Essential. While Amazon and Google have released the software needed to embed their assistants on devices they do not make, Apple has not done so.

Essential declined to elaborate on how it plans to embed Siri on the device, and Apple declined to comment.

The Essential Home takes a page from Apple's privacy play book. Like an iPhone, the Home will do much of the processing for voice and image recognition on the device itself rather than sending data to remote servers.

Essential also said the Home device will communicate with home appliances like lights and thermostats directly over the home network, rather than sending data to remote servers. Apple's HomeKit system takes similar approach.

Rubin, Essential's CEO, co-founded Android and sold it to Google in 2005. He ran Google's mobile efforts until 2013 before a brief stint running the firm's robotics division. He left Google in 2014 to focus on starting hardware companies.

Essential plans to announce a ship date for the devices in the next few weeks. The company did not say whether it planned to sell the phone directly to customers online or in physical stores.

Essential for the first time revealed its staff on its website, listing Wolfgang Muller as head of channel sales. Muller previously ran North American retail operations for phone maker HTC, according to his LinkedIn profile, suggesting that Essential plans to sell phones through retail stores, carriers or both.