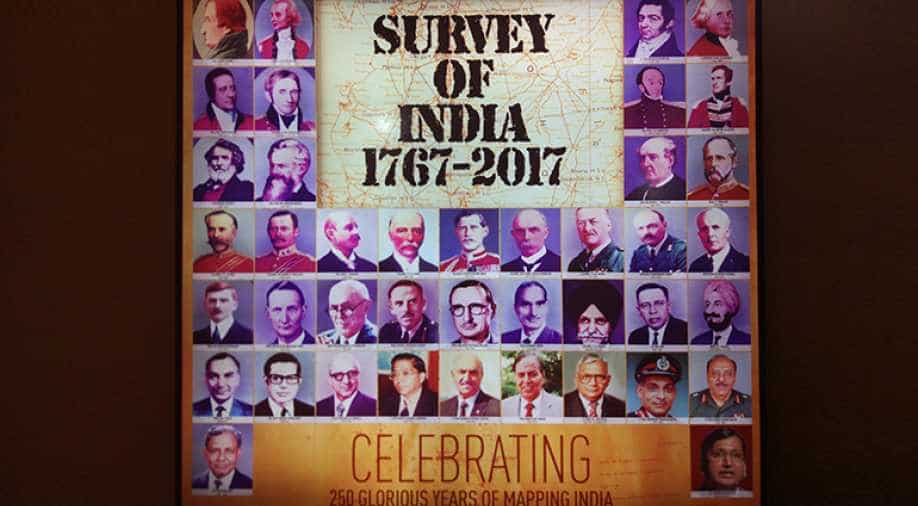 Set up in 1767, Survey of India - the country's oldest surveying and mapping agency - is celebrating 250 years of mapping India. Over the last three centuries, Survey of India, which happens to be the oldest scientific department of India, has spearheaded various mapping and geospatial initiatives for the country, and has worked in close association with a plethora of multilateral agencies around the world. Celebrating the occasion, WION brings you 10 vintage tools and unique inventions that were used to map India.

1. The Great Theodolite: Manufactured by Troughton and Simms and valued at 650 pounds, the Great Theodolite was used for the measurement of horizontal and vertical angles during the Great Trigonometrical Survey in 1866. Weighing 459 kgs (when packed), it arrived in India in 1802.

It includes a 36-inch horizontal circle with 5 verniers and an 18-inch vertical circle. The Great Theodolite survived two accidents, the first in 1808 at Brihadeeswarar Temple, Tanjore (Tamil Nadu), which seriously damaged the instrument, and the second in 1825. It was repaired by Syed Mir Mohsin, Instrument Repairer, who was later given the title of Mathematical Instrument Maker.

The Great Theodolite was used for the measurement of horizontal and vertical angles during the Great Trigonometrical Survey in 1866. (WION)

2. Marchant Calculator: These types of calculators were used by Survey of India up to 50 years ago. The first merchant calculators were pretty different from the redesigned Silent Speed Proportional Gears machines, which by far were found to be the fastest of their type, running at 1,300 cycles per minute.

Marchant Calculating Machine, the company behind these calculators, was founded in 1911 by Rodney and Alfred Merchant in Oakland, California. (WION)

Sextant is a navigation instrument. (WION)

5. Dip Circle: Dip circles (also known as dip needles) are used to measure the angle between the horizon and the Earth’s magnetic field.

In this image is a Dip Circle device. (WION)

6. Colby’s Compensation Bar: Colby of the Irish Survey, invented the method of measuring base lines with compensating bars, which automatically eliminated the errors arising from change in temperature. The apparatus consists of two bars, one made of brass and the other of iron, firmly clamped together in the middle so that no motion can take place at their centres. Six such compensation bars were manufactured by Troughton and Simms. And after being tested by Everest against standard bars on Lord’s Cricket Ground, these were brought to India in 1830. With these bars, 10 base lines were measured between 1832 and 1869.

Colby’s Compensation Bar is an instrument to measure base lines. (WION)

7. Transit Telescope: Introduced in India in 1872, it was used till 1892 to determine around 68 arcs in the country. This telescope has a focal length of over 5 feet.

8. Sun Compass: It’s a device that operates like a sundial. The Sun Compass indicates direction by employing the angle of the shadow cast by the Sun in conjunction with a compass card, a flat disk marked with points and degree of direction. In the past, the Sun Compass was employed for surveying the land.

Sun Compass was used in the past for surveying of land. (WION)

9. Night Lamps: Everest insisted that the observation for principal triangles should be made to luminous signals and heliotropes by day and to blue lights or vase lamps by night. The reverberatory lamps were made as per Everest’s order by Simms. They comprised an Argand burner with glass chimney, and were most efficient, except in atmospheres full of smoke and mist. These lamps were excellent in clear weather up to 60 miles, but could not penetrate a thick atmosphere.

Night lamps were made as per Everest’s order by Simms. (WION)

10. Montgomerie’s Box of Mathematical Instruments: This box of instruments was owned and used by Col. Montgomerie between 1852-1878. Montgomerie conducted the first Trignometric and Topographical Survey of Kashmir, and in the course of his Triangulation, observations were taken at stations as high as 20,600 feet, while signals were erected at heights over 21,000 feet. In spite of challenges, the triangulation proved to be of exceptional accuracy and the second highest peak in the world, K2 (height 28,290 feet), was first observed by Montgomerie.