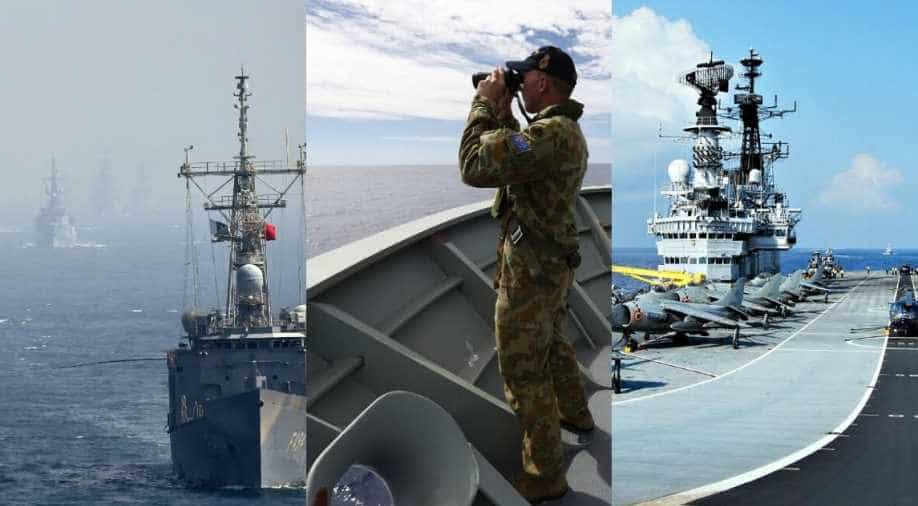 Chinese presence in the Indian Ocean calls for a stronger navy at home. Photograph:( AFP )

India has to boost its maritime power to counter China.

The power game in the seas is a challenging arena and India must realise the changing dynamics.

Strategic influence and trade supremacy - these battles will be fought on the Indian ocean.

And the question is simple - is India ready for the final frontier? How does India compare with other countries, especially China?

As always, numbers give perspective. According to the Global Firepower Index, the US tops the list, followed by Russia, China and India, but on the seas, China's navy is the clear leader.

One can check any metric, china's maritime power has multiplied in the last decade.

One, the careful and gradual build-up to dominate the East China Sea, as well as, South China Sea. Two, Beijing wants more access to the Indian ocean

China has trade interests and territorial interests and it won't back down. It is buying access to crucial ports through big-ticket infrastructure loans.

In future, these ports could host China's military installations. The pattern is obvious and that brings us to India.

India's Navy is by no means inferior, but it's not enough to be on the back foot and play a catch-up - it's time to match-up with China.

There are 32 ships and submarines that are under construction. The Indian government has also approved the construction of another 56 warships and six submarines - as a part of its 10-year plan.

Some of these plans are already at an advanced stage. There is a 12 billion-dollar initiative called project 75I to acquire advanced submarines.

It's not just acquisition, India has also domestically built a nuclear-powered missile submarine - the INS Arihant.

This submarine has already completed its first deterrence patrol and will enable India to fire nuclear weapons across all routes - sea, air and land.

India has to boost its maritime power to counter China. It is making the right moves. India is strengthening ties with countries in the Indian Ocean region, like the Maldives and Sri Lanka.

India is engaging with strategic coalitions such as the QUAD (the four-nation bloc of India, Japan, Australia and America-- to counter China's maritime expansion).

Not just that, Admiral Singh acknowledged the rise of China's influence in the Indian ocean but he expressed confidence in India's ability to meet any challenge on coastal security. The comments signify India's emphasis on naval supremacy in the Indian ocean.

About 40 per cent of India's trade happens with the littoral countries along the Indian Ocean rim. For maritime trade as well as security, the Indian Ocean region is the biggest game. India needs to put all its energy in preserving the advantages in the ocean and find new gains.

Without an iota of doubt, the sea is the next frontier. There are plenty of challenges, but there are truckloads of opportunities too for New Delhi.