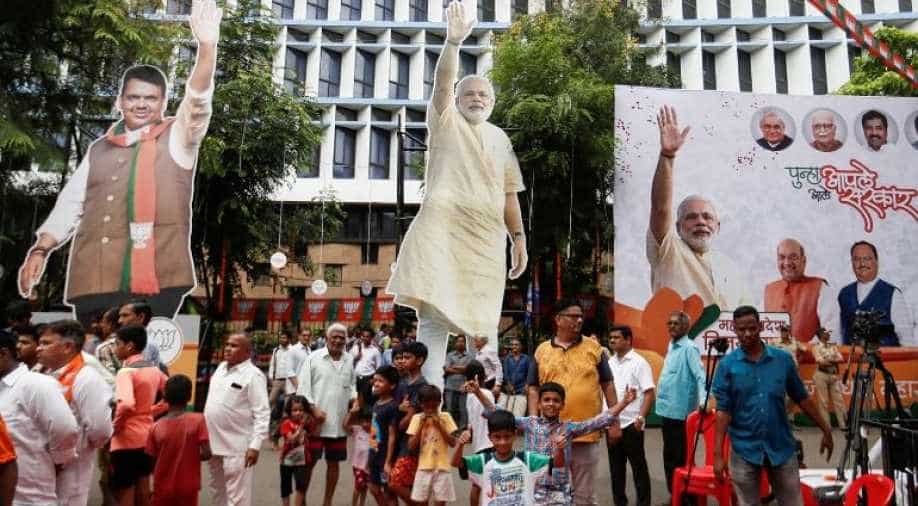 Cutouts and posters of BJP leaders are seen outside the party office in Maharashtra. Photograph:( Reuters )

When the ludicrous exit polls are beamed, it has a cascading effect.

It is high time that such a charade is put to an end forever. Election after election, the absurd pretence has been thrust on the people in the form of the so-called exit polls and countless hours of mundane analysis on something which is a far cry from reality. Soon after the polling is over, broadcasting channels go gung ho-over their predictable election outcome without any iota of shame when they are so off the mark when the final results come in.

In a country as vast as India, is it advisable to bank on the opinion of a few voters leaving a polling station after they have cast their vote? What is the guarantee that the voter is not lying? Moreover, in many instances, it has been found that there is a pronounced contrasting pattern of voting in constituencies. Do the media channels cover each and every constituency? Importantly, a very small sample of population is covered for exit poll and a very few constituencies are targeted. Predicting the results of an election with around 900 million voters is awfully difficult. This is the reason why there is a boomerang effect on such predictions.

The case in point is the 2004 Exit Polls when almost all the major television channels went horribly wrong when they predicted the return of Atal Bihari Vajpayee’s NDA government. To their shock, the Congress-led UPA emerged victorious. Again in the Delhi assembly elections in 2015, the predicted victory margin of the Aam Aadmi Party was nowhere close to the reality when it bagged 60 of the 70 assembly seats. And in the latest case, all pollsters, except the India Today, predicted the humungous victory of the Manohar Lal Khattar government between 71 to 80 seats in the 90-member House. The performance of Khattar-led Bharatiya Janata Party was nowhere close to the expectations as it could not even achieve a simple majority leading to the hung house. The Congress, which most exit polls predicted to win between 11-12 seats, went on to win 31 seats.

What has often been seen that a media channel propounding the cause of a particular political party tends to defend as well as predicting its victory? And when the shocking election results are announced, the channel would not eat the crow. It is an open secret that most of the Indian media channels, barring a very few, are biased and they tend to overzealously favour a particular political party (no prizes for guessing), often jeopardising their authenticity.

When the ludicrous exit polls are beamed, it has a cascading effect. Besides the usual spectacle in the news channels, there is eruption on social media. They too join the party, take over from the channels and start expressing their political views. Amidst all this frenzy, who gets martyred? Investors! The stock exchanges too react to the exit polls and sometimes a fortune is wiped out. The markets open disastrously if a defeat is predicted for the incumbent ruling party or the possibility of a rag-tag coalition government.

Given the vast difference between the predicted and actual results, these Exit Polls should do well to widen their sample size to arrive at a more realistic opinion.