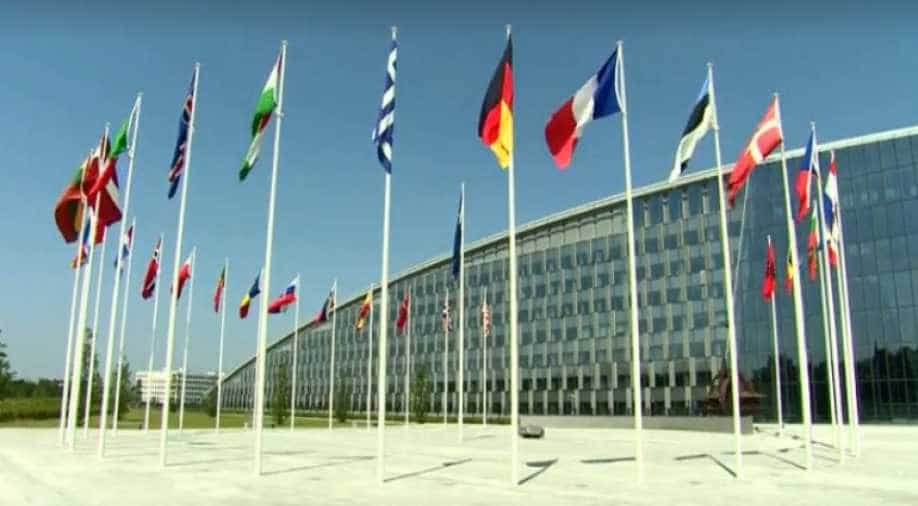 Are the risks too great? Photograph:( Reuters )

NATO’s relevance in international security dynamics is still intact. However, the resurgence of Russia and a rising China is posing serious challenges to it once again.

Last month marked the 70th anniversary of the formation of the North Atlantic Treaty Organization (NATO). Formed post-World War II, it is a political, military and a diplomatic alliance between the United States and its allies — primarily European nations.

The need for such a grouping arose in the backdrop of the Cold War, where the US and its allies wanted to protect their interests from aggression and expansionism of the Soviet bloc.

The NATO treaty was signed on April 4, 1949 by the US, Canada, Belgium, Denmark, France, Iceland, Italy, Luxembourg, the Netherlands, Norway, Portugal and the United Kingdom, wherein Article 5 outlined the NATO’s motto — ‘Collective Defense’. It stated that an attack on any one of its members would be considered an attack on all the NATO members.

That, effectively, puts West Europe under the US’s ‘nuclear umbrella’. The collective strength of NATO has been unmatched by any other military grouping in the last seven decades, including the Warsaw Pact, which was created by the Soviet bloc as a response to NATO.

NATO’s deterrence has also been formidable as no country or group of countries possess the wherewithal and capability to challenge its collective might.

However, NATO has faced serious challenges while fighting non-state actors, especially post-Cold War. After the break-up of the Soviet Union in 1991, NATO had to redefine its aims and goals since there was no Soviet Union left to contain. Therefore, the NATO alliance shifted its focus towards countering terrorism.

In this context, the 9/11 terror attacks became a watershed moment in NATO’s seven-decade history, as it was the only time when Article 5 of the treaty was invoked. The US and its allies decided to retaliate collectively in the US-led military campaign (2001) in Afghanistan.

While the fight against terrorism has got NATO much praise, it has also been seriously criticised by human rights groups after the NATO bombings of Yugoslavia where hundreds of civilians were killed due to air strikes.

The collective, however, justified its actions by hiding behind Article 4 of the NATO charter, under which its member countries can bring any issue of concern to the North Atlantic Council for discussion, particularly those related to their security.

Over the last seven decades, NATO has been instrumental in its commitment to safeguard the freedom, common heritage and civilisation of their peoples, founded on the principles of democracy, individual liberty and the rule of law. This makes NATO a key cog in the trans-Atlantic security dynamics in particular, and international security in general.

At present, NATO’s relevance in international security dynamics is still intact. However, the resurgence of Russia and a rising China is posing serious challenges to it once again.

The steep decline in US-Russia relations over the last couple of years have reached alarming levels, which is comparable to Cold War years, thereby making NATO’s role in safeguarding the interests of US and its allies even more paramount.

However, the US — especially under the Trump administration — has been extremely critical of NATO in the context of sharing the financial burden of its operation, making it an existential threat to NATO’s functioning.

Trump’s stand on funding NATO has made it a headache for US allies, as well the opponents of Trump within the US, who find this problematic for the smooth functioning of this group.

The other big trouble is Trump’s reluctance to criticise President Vladimir Putin, under whom a resurgent Russia is posing a serious challenge to NATO’s supremacy. The Kremlin already considers NATO as a security threat in Eastern Europe and is therefore regarded as a hostile military bloc by Russia.

In this context, the US presidential elections scheduled for next year becomes even more important as it could well decide NATO’s future. US allies will therefore keep a close eye on these elections as the stakes are much higher for them this time.

While NATO began as a political and military alliance designed to restore and maintain the security of the North Atlantic area, it has grown as an institution in itself whose future seems very enduring and robust.

Author is a Senior Research Fellow at School of International Studies, JNU